Winston Man Dies at 68 of Cancer 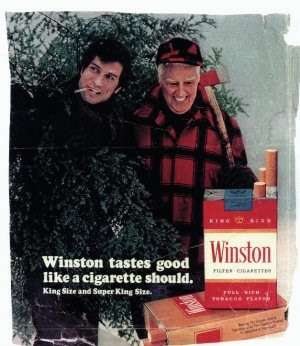 Alan Landers, who started smoking at 9 and became a model for advertisements of Winston cigarettes and Tiparillo cigars, then contracted lung cancer and became a highly visible crusader against smoking, died Friday at his home in Lauderhill, Fla. He was 68.

Robin Levine Carns, a niece, said the cause was complications of treatment for cancer of the larynx, which Mr. Landers attributed to smoking, as he did his two lung cancers and heart disease.

As a foe of smoking, Mr. Landers billed himself as the Winston Man, in reference to his modeling for advertisements using the notoriously ungrammatical encomium “Winston tastes good like a cigarette should.” He visited hundreds of schools, made appearances for the World Health Organization and testified before Congress.

His argument was his personal story. He told of puffing through literally cartons of cigarettes in photographic sessions as he sought to achieve the ideal spiral of smoke while not letting ash at the tip of the cigarette exceed a quarter-inch. He said he was not warned of the hazards of smoking and called the industry “the biggest con of the 20th century.”

To dramatize his point, Mr. Landers would rip open his shirt to show scars from his operations.

In 1995, a spokeswoman for the R. J. Reynolds Tobacco Company told The Associated Press that there were warnings on cigarette packages at the time of Mr. Landers’s modeling that he was free to read. Calls to the company’s public relations department on Tuesday were not returned.

Wayne McLaren, one of the models for the Marlboro Man, also became an antismoking spokesman before he died of lung cancer. Janet Sackman, who was once the Lucky Strike girl, has supported antismoking efforts since she lost her larynx and part of a lung to cancer.

Mr. Landers sued Reynolds in 1995, saying the company had exposed him to health risks without warning him, and the matter is finally coming to trial on April 13. His lawyer, Norwood S. Wilner, said Mr. Landers’s family was deciding how to proceed.

Mr. Landers was not part of a class-action suit filed in 1994 in Florida involving up to 700,000 smokers, which won a jury award of $145 billion in 2006. The State Supreme Court voided the award, saying each smoker’s damages must be decided individually. In February, a jury awarded a smoker’s widow $8 million in the first such decision.

Mr. Wilner said Mr. Landers was not included in the original class-action case because “we wanted him to be able to speak for himself.”

Alan Stewart Levine was born in Brooklyn on Nov. 30, 1940, and grew up watching movies; his twin brothers, who were ushers, let him in free. He told USA Today in 1995 that he began to smoke “before my bar mitzvah.” At 17, he joined the Army, which gave him a “smoke break” five minutes after each hour. He developed a smoking habit of two-and-a-half packs a day.

He went to New York, took acting classes and worked for several modeling agencies in succession. He appeared in magazines like Vogue, Cosmopolitan and GQ, and was once a centerfold in Playgirl. One of his biggest modeling jobs was with Reynolds, which he said paid him $3,000 to $5,000 a day.

In 1998, The Palm Beach Post reported that in a deposition Mr. Landers said he had modeled in Winston print advertisements only for a one-week shoot. Mr. Landers acknowledged this to the newspaper, as well as its report that he had once had a cocaine addiction and had pleaded guilty to two armed robberies.

Mr. Landers had small parts in television series and in Woody Allen’s movie “Annie Hall” and ran an acting school in Los Angeles for many years.

Mr. Landers, who never married, is survived by his brother, Jack Levine, of Destin, Fla.

Over the years, some people questioned how Mr. Landers could have been as ignorant of the dangers of smoking as he said he was, particularly after the surgeon general in 1964 officially reported that it caused cancer. He answered that his addiction was too strong, and the warnings not sufficiently forceful.

Mr. Wilner offered another possible explanation, one relevant to Mr. Landers’s lawsuit: “He knew a lot less than R. J. Reynolds did.”