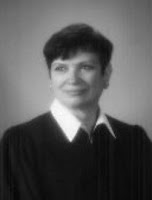 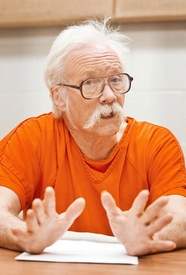 At my initial appearance on April 23rd, you directed the jail administration to treat me as someone who had had, in the previous 7 months, two heart attacks including full cardiac arrest, a double bypass and a stent put in. They took me out of a cell where I had no way of signaling if I were in distress, but since that time the nursing staff here has disregarded your directive in several respects.

I am in receipt of a list of meds from my surgeon Dr. Kantamneni and cardiologist Dr. Mnuk of St. Mary’s Hospital in Madison, WI that includes melatonin. As I’ve been tormented by insomnia all of my adult life, I took melatonin on an as-needed basis before my heart attacks. The nursing staff here is defying the MDs in Madison, saying it is “not our policy to hand out sleep aids.” But melatonin is not Benadryl. It is a naturally occurring pineal substance that must be supplemented as we age because without it, we die a lot sooner. It is at least as important as an antioxidant and to combat stress for someone who has had a heart attack as it is to induce sleep.

Simple sleep deprivation leads to deterioration of health and is a standard tactic of law enforcement for coercing confessions and totalitarian regimes for breaking down dissidents. It is banned under the Geneva Convention. Melatonin is responsible for REM sleep. Rats jolted with electricity upon onset of REM suffer collapse of the their immune systems and toxic shock from normally benign intestinal micro-organisms.

Nurse Michelle says I should walk in circles around the mod, but I have acute double hernias at the bottom of my abdomen. The one on the right began to give me sharp, stabbing pains in early April that have subsided since I spend all my time on my back, reading, with the hernias pushed in. Glenn Shapiro is in receipt of a letter addressed to you from surgeon David DeAngeles of St. Mary’s Hospital saying I need an operation ASAP. I tried to get it just before I came here, but the local surgeon in Fox Lake had just botched a surgery on another inmate with an identical condition and there was no time to go back to Madison.

I’m willing to wait so the Wisconsin DOC can pay for surgery by someone I trust, but Nurse Michelle insists on giving orders she knows cannot be followed. A clue to her perspective is her response on the matter of my diet:

The only concession to my special needs is soy milk, which is a life-saver, because I used to get symptoms of congestive heart failure (which I thought was asthma from lactose intolerance) every morning after consuming milk at the Iowa Co. Jail prior to my first, big heart attack. In the interval before the Feb. 24th episode that necessitated the stent, I continued to eat eggs, lots of melted cheese on toasted bagels and pizza. My bloodwork showed my cholesterol was too high, and I was switched from simvastatin to Lipitor. But the doctor at Dodge (intake prison) put me back on simvastatin and I concurred, because Lipitor almost killed a friend of mine. And since the stent, I’ve been fanatical about no fat, no sugar, no salt. My bloodwork probably reflects that, and my blood pressure is normal. If you delete egg yokes, cheese and potato chips from the skimpy diet here, though, there’s not enough to eat. And commissary is all sweets. So I asked, not for anything outside the ordinary fare, but just that they replace things I can’t eat with extra helpings of veggies and oatmeal that I can eat. Nurse Michelle said: “If I do it for you, I have to do it for everyone.”

Well, everyone didn’t just have two heart attacks, including one where my heart stopped so long they had to put me in an induced coma for 6 days! The staff actually discontinued my fish oil with the excuse that it’s not a prescription drug, when the doctor definitely ordered it! It took 2 months of intense negotiating just to get them to accept it from a pharmacy with me paying. I’d be willing to swap food with other inmates, but that’s against jail rules, and I’d already been written up for bleeding. Because my father and maternal grandfather died of stroke at 65 (I’m 65), after my stent, Dr. Jeff Kamlet recommended I go on Plavix, and Dodge put me on clopidogrel (generic Plavix). The only problem is, if I scratch the psoriasis in my ear, it can bleed.

One day my elbow itched, I scratched it, and it wouldn’t stop bleeding for 4 hours. I showed it to Officer Jones, who’s an EMT, and he “gave me a direct order” to hold a wad of toilet paper on it ’til it stopped. But I don’t scab right, and every time I moved even a bit, it pulled off the semi-clotted blood. Forty-five minutes later I was bleeding at the dinner table. I threw the now-bloody wad of toilet paper into the waste basket behind me, next to the sink, and got a fresh wad. Still bleeding. I don’t have HIV or hep C, but it distressed the other inmates when I attempted to airdry it so the scab wouldn’t pull off. Finally another inmate gave me a small bandage (also against regulations) which reduced the bleeding to an ooze. But mea culpa! I should have flushed the toilet paper. An inmate with mental problems, one Marchinsky, with a history in a previous mod of hazing one particular inmate and manufacturing evidence against him (by urinating on the back of the toilet), fished a little piece of toilet paper out of the wastebasket and put it on the counter immediately adjacent. Someone else noticed it, raised a ruckus, and blamed me. But if I’d set it on the counter and a piece of the outside had stuck there, it would have been quite bloody. This piece had only a little stain on one edge, like it had been plucked up by someone who didn’t want to touch the blood.

I threw it away, thought nothing of it because it left no stain. Jones came in, bought into the idea I was at fault, and was having me spray and sanitize the counter, when I pointed to the bandage and said: “But what are you going to do about this? It’s still oozing.” He threw me in handcuffs. On the way to intake I said, “This is a medical situation, not a disciplinary problem.” He put me in a cell, but at least he gave me a paper towel. After 35 minutes of clamping the paper towel on the bandage, it finally stopped oozing.

Even though I’d done nothing wrong, I apologized, and sure enough, two days later, Jones had written me up for “refusing a direct order,” “failure to maintain sanitation,” and “disturbing the peace.” Glenn Shapiro has the complaint. It says I stopped oozing in 10 minutes. But I was watching the clock because I was due to make a phone call, and I know it took 30. I opted for a hearing, got a witness to Marchinsky faking evidence against another inmate, and asked that they review the tape to see who actually left the square of toilet paper on the counter. The hearing officer informed me he was dropping the charges anyway because it was “too much trouble” to review the tape. He did let it into the record that Jones could’ve taken me out and bandaged me up to begin with. The next morning I had the only coronary distress I’ve had since I got here, an episode of racing heartbeat.

The one dicey thing about my clotting problem is that the combination of meds I’m on tends to give me impacted stool, and I’ve had bleeding from that. They put me on Metamucil, which helped. Then they changed my Senna to docusate sodium, which Dodge had discontinued because it was ineffective. I got the Senna back with the fish oil, but not before I got a hemorrhoid. I hate to think what would happen if I got a bleeding hemorrhoid and it wouldn’t stop. And trying to force the stool out makes my right hernia hurt. I just got another twinge.

The sole object for the nursing staff seems to have been to get me to pay for my non-prescription meds myself. Nurse Michelle actually withheld the Tinactin (tolnaftate) for my foot fungus so I’d have to buy it off commissary, claiming the Wisconsin DOC might be smuggling drugs into Saunders County in the depleted tube. The fungus I have is not athlete’s foot. It’s the kind that lodges under your toenails; tolnaftate only gets it in the callouses. I can’t get rid of it unless they give me Lamisil, which they’ve refused to do. Instead of a short shower every day, which causes fungus flare-up, I have to take a long hot shower every other morning and soap my feet multiple times. But that way I can soften my beard, shave by touch in the shower, and not cut myself, so I don’t bleed.

To me, the important issues are melatonin, food, and the hernia operation, but not so important I’ll pack it in and waive my rights to a proper sentencing hearing with witnesses who can establish that the only national conspiracy I’m involved in is the medical marijuana movement, and the only international dimension is the ibogaine movement. St. Mary’s says I still have the atherosclerosis, that I’m going to have the heart problem for the rest of my life. Nothing settled in one place seems to carry over to the next place. Judge Van De Hey furloughs me after the first heart attack, then re-instates most of my sentence Dec. 29th. and a month and a half later, I have another heart attack. Special diet right after the stent, at Dodge, followed by the same thing as everyone else at Fox Lake, but at least with lots of veggies, followed by stuff I can’t eat here, where they act like I never even had heart attacks. Which begs the question: If I can’t even get proper health care in a situation that’s under the control of a judge, what will happen at the next place, where my only recourse is to sue in Federal court?