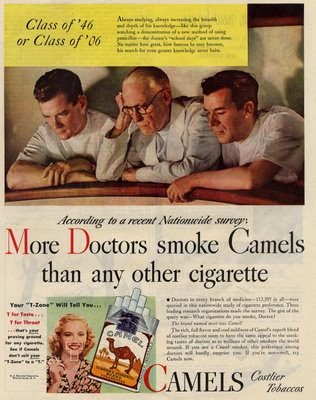 The New England Medical Journal and organizations as the American Medical Association propagandize for the perversion of a profession that has largely relied upon illegal and immoral tactics to confuse the public about herbal based medicine, particularly confusing dilute and ultra concentrated forms of cocaine use, while shilling for tobacco cigarettes.  This has resulted in a market distortion that killed over 100 million people during the last century with the suppression of Coca, which the USDA recognized as a market threat to Tobacco, while harming health with petrochemical patent medicines known today as pharmaceuticals to say nothing about the harms of drug prohibition and the miseries caused by its enforcement.  It epitomizes a bloated profession that has bilked the public out of billions of dollars that should be sued for medical fraud and human rights violations.

From The New England Journal of Medicine review of the book Quack, Quack, Quack: The Sellers of Nostrums in Prints, Posters, Ephemera and Books by William Helfand


The popular circus showman P.T. Barnum once warned that "humbug" was everywhere in the medical profession. In Quack, Quack, Quack, William Helfand, a historian of pharmacy, proves Barnum right. A chronicle of quackery in picture and prose, Helfand's book examines the depths of medical chicanery in Western culture over the past 400 years.

"Quacks have been with us forever," explains Helfand. Never "static," quackery has "modified its offering to adjust to new therapeutic discoveries and new means of communication," as well as "to almost any prevailing political and regulatory system." Helfand demonstrates the adaptability of quackery with 183 fascinating images of promotional material, along with the popular and professional reactions they inspired. Mined from various archives and libraries, the images depict nostrum peddlers ranging from those found at French country fairs to those involved in the popular Indian medicine shows inspired by the North American frontier. There are quack products for addiction, such as No-To-Bac for smokers, as well as addiction-causing products such as Vin Mariani, a cocaine-based panacea. Readers will enjoy learning about Samuel Solomon's Balm of Gilead that targeted "masturbation, scrofula, and related ills" and the "Health Jolting Chair," which was advertised as a convenient exercise to preserve "the most highly prized feminine attractions." Helfand also includes musical scores such as those for the "Water Cure Polka" and "Blue Glass Gallop," which illustrate the popularity of hydropathic and light-ray treatments during the Gilded Age. Other paintings, illustrations, and title pages lampoon quacks and their "cures." One satirical cartoon from mid-19th-century England depicts a victim of an overdose of James Morison's vegetable pills with carrots, cabbage, and corn sprouting from his limbs. Although the images are instructive on their own, Helfand adds insightful commentary and, when necessary, English translations.

Within the book's brief 50 pages of text, Helfand defines "quack" as "a pejorative term" used by members of the established medical community to disparage "irregulars" who ignore or reject medical orthodoxy. Along with their status as outsiders, quacks, Helfand explains, possess certain characteristics that signify their trade. These often undereducated and itinerant doctors and druggists engage in aggressive advertising, exaggerating the effectiveness of their abilities or products.

Perhaps most important, quacks have proved themselves to be talented entertainers capable of wowing audiences with enthralling theatrics and bombastic rhetoric. Yet Helfand concedes that although regular and irregular doctors differ in style, they share many similarities, particularly since irregulars frequently imitate certain features of orthodoxy, such as medical jargon, in order to establish legitimacy or respectability. The boundary between regulars and irregulars was never clear. In fact, "in unsophisticated times," says Helfand, "the results of treatment might well have ended the same." Helfand's suggestion that quackery and irregular medicine were synonymous represents one shortcoming of the book. Were all irregulars quacks? Certainly not. For example, aspects of hydropathic and homeopathic medicine, both featured in the book, gained greater acceptance among mainstream physicians in the 20th century. Helfand ignores the emergence of osteopathic and chiropractic medicine, both of which the American Medical Association dismissed as quackery for decades. Had Helfand accepted conscious deceit as the essence of quackery, his definition would have been tighter. However, as he correctly points out, conscious deceit is difficult to prove. Overall, Quack, Quack, Quack is an enlightening and enjoyable book suitable for academics, health care professionals, and the general public alike. The images, many of which are in color, reveal in an entertaining format the long-standing tradition of quackery in Western medicine. "Despite what we do," concludes Helfand, "the quacks and their nostrums will be with us forever." I hope that there will be more books like this one to chart their development as we go. Eric Juhnke, Ph.D.

Copyright © 2003 Massachusetts Medical Society. All rights reserved. The New England Journal of Medicine is a registered trademark of the MMS.

About The New England Medical Journal's advertisements for Tobacco cigarettes:

This is part of an intermittent series of blogs featuring advertisements from medical journals. You can find the entire series here.

From the 1930s into the 1950s, medical journals—including the Journal of the American Medical Association and the New England Journal of Medicine—ran advertisements for cigarettes.1,2 The New York State Journal of Medicine alone published 600 pages of cigarette advertisements spanning more than two decades, starting in 1933.3 Around the same time, advertising agencies created campaigns featuring physicians; these continued until 1954, as concerns about the negative health effects of smoking grew. 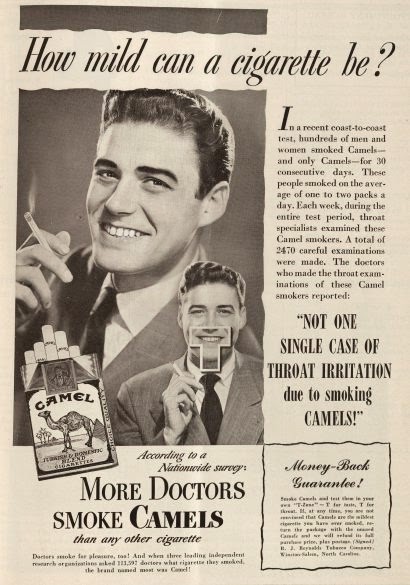 Presented chronologically below are some of the cigarette advertisements—and one cigarette paraphernalia‎ ad—that appeared in medical journals during the 20-year period. Note especially the 1945 series of ads that ran in several medical journals, including the Medical Woman’s Journal, celebrating the work of war doctors and suggesting that a Camel cigarette could be a welcome break.

Notable, too, is that the earliest ad shown here—printed in Preventive Medicine in 1937—comes from a New York Academy of Medicine publication.

For more information on the history of cigarette advertising, including the use of medical professionals in ads, visit SRITA, Stanford Research into the Impact of Tobacco Advertising.

Case of Removal of the Entire Stomach for Carcinoma; Successful Esophagoduodenostomy; Recovery

…closed.) Evening pulse 108, temperature 100°. Tsvo semi-solid movements of the bosvels in the afternoon. Midnight pulse 98, temperature 99.(1°. Vin Mariani in half-ounce doses was given instead of whiskey. March 11th. Pulse 104, temperature 99.8°. Vomited two ounces of flaxseed tea as soon as it svas…

Quack, Quack, Quack: The Sellers of Nostrums in Prints, Posters, Ephemera and Books

…many ailments and for the treatment of alcoholics and opium addicts. Cocaine made its appearance in the patent medicines of the time, including Vin Mariani and Coca Cola. During this time, many reports were published in the medical literature describing the untoward effects of cocaine. Many physicians…


Vin Mariani was created in 1863 and first sold by 1865.  It was made with an alcohol based infusion of Coca leaves dissolved in French red wine, and contained about 6 milligrams of cocaine alkaloid per fluid ounce.  A version called Elixir Mariani was fortified with small amounts of added isolated cocaine alkaloid.

The New England Medical Journal was first published in  1812.  The above three articles, published in 1878, 1892 and 1898 are the only mentions of Vin Mariani in their articles prior to the 1914 Harrison 'Narcotics' Act that show in a search of their web site archive.

The subsequent two articles published in 1990 and 2003 are the only ones likewise found to mention Vin Mariani after 1914.

After several decades of use, Vin Mariani was so described in Paris, by Mesureur, the French Ex-Minister of Commerce, and the current (in 1910) Director of Hygiene and Public Health, who approved and signed the French government's radical poster campaign against alcoholism:

The over lap in the popular use of opiates and alcohol, and that of opiates, alcohol and tobacco, brought about situations where coca’s use in combating the use of the first two led to the discovery of its efficacy in combating use of the third, with these being regarded favorably according to the account by Dr. Liberman and Villeneuve


“I have also employed it in cases, happily rare in our army, of chronic alcoholism resulting from the abuse of brandy, absinthe or strong liquors. The produced all the excitement sought by drinkers, but had at the same time a sedative influence on their nervous systems. I have frequently seen hardened drinkers renounce their fatal habit and return to a healthy condition." "I have also used to save smokers of exaggerated habits, from nicotinism. A few glasses of taken in small doses, either pure or mixed with water, acted as a substitute for pipes and cigars, because the smokers found in it the cerebral excitement which they sought in tobacco, wholly preserving their intellectual faculties."


This is owing to the DILUTE concentration of the cocaine within a fluid base, with cocaine absorbed relatively slowly.  Also, with cocaine as not only a CNS stimulant but as well an anesthetic, so drinking such a cocaine containing fluid would provide an anesthetic inhabiter effect numbing appetite and hence appetite for more, thus guarding against excessive drinking by providing a strong feeling of fullness from within the GI tract.  Such an anesthetic inhibitor effect of course would be absent with any of the other means of taking cocaine, particularly the more concentrated modes of sniffed cocaine hci, let along injecting it or smoking it in concentrated form as 'crack'.

Nonetheless, rather than explain any of this to its readers, The New England Medical Journal simply follows AMA derived patent medicine propaganda to smear Vin Mariani as somehow 'addictive' and curiously does so in the same breath as smearing the idea of a product for curing Tobacco addiction as so-called 'quackery'.

Such a juxtaposition of smearing reeks as a 'Freudian slip' in light of The New England Medical Journal's longstanding enshrinement of Tobacco cigarette advertisements, and the USDA-AMA circular 1910 'concern' over the use of Coca products as a 'Tobacco habit cure'.