Coca became increasingly advocated and used as a substitute for caffeine-containing beverages by some of the day's most prestigious medical minds, with the introduction of a greater variety of Coca leaf beverages beyond the naturally containing alcohol wines, elixirs and cordials.

One such prominent figure in the English-speaking world was William Martindale, President of the Pharmaceutical Society of Great Britain, and originator of the The Extra Pharmacopoeia. This was the ' established medical drug reference guide that is still published a century later as a counterpart to the U.S. Pharmacopoeia, producing its first ten editions from 1883 to the year of his death, 1902. Summoning up Coca's known therapeutic utility in 1886, Martindale suggested Coca as an alternative drink to those containing caffeine:

As a beverage to substitute for tea or coffee, a decoction or an infusion of Coca is worthy of attention at the present time. The Indian use of it in moderation seems to prolong life, much without the need of sleep or food, or even the desire for these, although in excess it has no doubt a degrading effect. A taste for infusion or decoction of Coca or its pharmaceutical preparations is easily acquired; if a good sample of leaves be used it is not even at first disagreeable.

Under the influence of Coca...it appears that a new force gradually introduces itself into our organism, as water into a sponge. Gubler [who?] thinks that as with tea, caffeine, and theobrome, Coca brings to the nervous system the strength with which is charged in the manner of a fulinate, with the difference that it only yields it slowly, not all at once.

Coca has been praised as a nervine and muscular tonic, preventing waste of tissue, appeasing hunger and thirst, relieving fatigue, and aiding free respiration, and being useful in various diseases of the digestive and respiratory organs. It is said to be specifically useful in many forms of asthma, chronic bronchitis, obstinate cough, phthisis, and general debility; in gastric derangements, owing to its slight astringency, it seems to give more tone to the stomach than the mere anesthetic action of the Cocaine it contains would produce locally; it is recommended for indigestion, gasttralgia, gastrodynia, nausea, sickness, distaste for food, is given to relieve pain, nausea, vomiting, or discomfort caused by excess in either eating or drinking or by pregnancy, and as a cure for morphine and alcohol craving. In using it for this in America it is said in some cases to have produced "Coca Craving."

Coca is also said to cause mental exhilaration, to overcome diffidence or bashfulness in company, and to be an excitement of the vital functions. It has been used in melancholia, in cases of inordinate hunger or thirst, such as [they] occur in some forms of diabetes, and in cases of general debility. Locally, a solution of the extract in water has been used as a pigment in irritated, inflamed, and granular conditions of the larynx and pharynx. 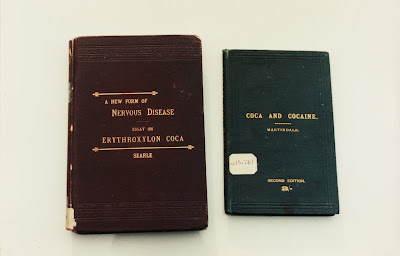