There is evidence that Mariani & Company attempted a dialogue with Wiley around 1908. There is a set of Mariani Figures Contemporaines in the U.S. Library of Congress complete from 1893 through the 1907 edition (but none of the later editions which ran through 1913, with a final edition released in 1925), each with a placard noting their donation in 1941 by “Mrs. Harvey Washington Wiley”.

And there is a letter included in Wiley’s papers at the US National Achieves, dated December 9, 1908 from Jacob Jaros on Mariani & Company letter-head with a lithograph of the Mariani laboratory at Neully-Sur-Seine, France. This letter requested a meeting with Wiley while Jaros and his wife were traveling in Washington, D.C. However, there is less indication of whether such a dialogue ever took place. While hundreds of other such letters received by Wiley that are contained within his collection of papers (available at the U.S. National Archives II in Beltsville, Maryland), are accompanied by drafts of his replies, no such Wiley response accompanies this Jaros letter. 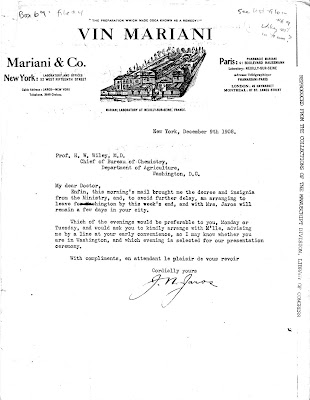 “knights that have shown great prowess”.

This letter does not specify the name of any organization of such “knights”. There are a number of such established organizations that employ that term within their name: Knights of Templar; Knights of Malta; Knights of Columbus: all of these being connected to the Roman Catholic Church. This is notable because Mariani had received such lavish praise from the Vatican in 1898 and 1904, yet where can one find any indication of any subsequent support for Coca from the Roman Catholic Church against this 20th century anti-Coca (and indeed, anti-medical freedom) crusade? Harvey Washington Wiley
Chief of the Bureau of Chemistry of the
United States Department of Agriculture (USDA),
a "Knight" that has shown "great prowess"
Posted by Douglas Andrew Willinger at 5:26 AM

What i like to know was Harvey Washington Wiley and William Hearst was following Luis Martin's Agenda or Orders to the letter, it seems Cannabis and its potent brother Cannabis Oil was banned in the same fashion as the Vin Mariani.