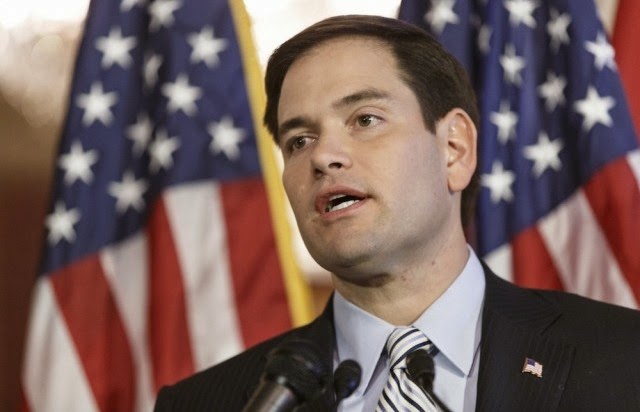 Marc Rubio- another chickensh*t politician for the pharmacratic inquisition


insists upon protecting alcohol from the safer substance of MJ

Sen. Marco Rubio won't divulge if he ever smoked marijuana. Most likely, the Florida Republican, who admits he "goofed around in class" when he attended South Miami Senior High School in the late '80s, inhaled a few joint and bong hits back then and during his college years. If he says he didn't, then someone might come forward and out him.

When asked by ABC's Jonathan Karl if he ever used pot, Rubio was predictably evasive. "Here's the problem with that question in American politics," the conservative Congressman explained. "If you say that you did, then suddenly there are people out there saying, 'Well, it's not a big deal. Look at all these successful people who did it.' I don't want my kids to smoke marijuana and I don't want other peoples' kids to smoke marijuana. I don't think there's a responsible way to recreationally use marijuana. On the other side of it, if you tell people that you didn't, they won't believe you."
"If you didn't, you can just say that you didn't," Karl followed up.

"I understand it's a question that people think they need to ask, but the bottom line is I don't think people should smoke marijuana," Rubio retorted. "Marijuana is illegal under federal law. That should be enforced. I understand that states have decided to legalize possession under state law, but the trafficking and the sale of these products is a federal crime.

"Right now that's not being enforced," Karl countered, at which point, Rubio went into full anti-drug mode: "Look, we live in a country that already has problems with substance abuse, ok? "We already see the impact that alcoholism is having on families, on drunk driving, on all sorts of things. And now we're going to add one more substance that people can use? And here's the other argument: When something is legal, implicitly what you're saying is it can't be all that bad. If it's legal it can't be bad for you. The bottom line is I believe that adding yet another mind-altering substance to something that's legal is not good for the country. I understand there are people that have different views on this, but I feel strongly about this."
Republicans need to a moderate voice if they truly hope to take back the White House in 2016. Rubio, who's considering a run, is not that voice. And that's the bottom line.