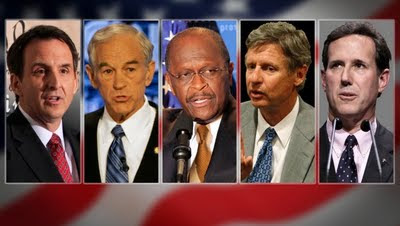 I heard two candidates address the drug issue, in this order- Ron Paul and Gary Johnson.

As so prefaced by the moderator:

Ron Paul would legalize "cocaine" and "even heroin" *if* the States allowed it.

Gary Johnson would legalize Marijuana and tax it like alcohol and or Tobacco, though despite admitting that 90% of the problem was prohibition, could not mention the word 'legalization' nor even 'decriminalization' for anything else, with only the mention of 'harm reduction' for other substances -- frankly a diverse array of substances.

That lapse, IMHO maintains ignorance of how prohibition monopolizes the "cocaine" and "opiate" markets for these drugs most problematic forms, particularly injections and "crack", while really only truely 'banning' the safest and most benificial forms.

That lapse is quite a remarkable omission, given the implications of health care (let alone court-incarceration) costs; it bespeaks a reality of protecting multi-billion dollar MARKETS -- aka Coffee, Tobacco and pharma, by governments of controlled fraternalists, propping up a multi-billion dollar cigarette-pharamecutical racketerring enterprise for protecting the markets such things notably as the 100 million deaths from the most dangerous -- Virginia Bright Leaf Tobacco, from the foreign market threat of safest stimulant -- South American E. Coca, involving a Washington, D.C. Federal Triangle powerhouse law firm heavily involved with pharamecutical and Tobacco industrial interests, indeed being the law firm coordinating the cigarette industry legal defense with other law firms, the previous employer of the current U.S. AG Eric Holder now coordinating the DOJ's attacks upon Medical MJ, and even advising the private Drug Policy Foundation and other drug policy reform organizations.

Johnson's end of comment about such matters should be a health rather then a court matter sound promising.

However, that he can acknowledge prohibition's harms, while limiting its repeal to only MJ is not.

Vote on this question

With Ron Paul, the candidate that would legalize cocaine and even heroin if the States allowed it at 70% and Gary Johnson who would only legalize Marijuana at 5%- "cocaine" and "heroin" are hardly the devil words they used to be, being largely replaced with "prohibition".
Posted by Douglas Andrew Willinger at 10:58 PM