“All I gotta say is that State Judge State Judge Raymond S. Childress of Covington, LA - the judge who imposed this sentence - should be disbarred for violating the 8th Amendment'­s prohibitio­n of cruel and unusual punishment­. Yep, I said it.” 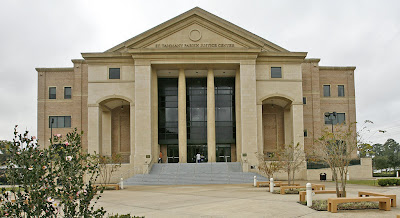 He didn't fare too well after moving to St. Tammany Parish, however. A single such conviction on the north shore landed the 35-year-old in prison for the rest of his life.

State Judge Raymond S. Childress punished Hood under Louisiana's repeat-offender law in his courtroom in Covington on Thursday. A jury on Feb. 15 found the defendant guilty of attempting to possess and distribute marijuana at his Slidell home, court records show.

Hood moved from eastern New Orleans to the Slidell area after he admitted to separate charges of distribution of marijuana and possession with intent to distribute marijuana on Dec. 18, 2009, in Orleans Parish Criminal District Court. He received a suspended five-year prison sentence and five years' of probation for each -- which was precisely the same penalty he got in that court after pleading guilty to possessing and intending to distribute marijuana on Feb. 22, 2005.

When Hood switched homes, he also requested a new probation officer based in St. Tammany. Authorities granted the wish, and the officer, Dustin Munlin, drove to Hood's place for a routine visit on Sept. 27, 2010.

Munlin found nearly two pounds of pot throughout the house, according to court records. He alerted Sheriff's Office deputies. They arrested Hood, who apparently shared the King's Point house with his mother and young son.

Prosecutors later charged him with one count of possession with intent to distribute marijuana.

At Hood's one-day trial, the evidence presented by the prosecution included a digital scale and about a dozen bags that had contained marijuana before being seized from the house, testimony showed. Deputies also found $1,600 in cash and a student-loan application with Hood's name on it inside of a night stand.

Jurors deliberated for less than two hours and convicted Hood of a reduced charge, which usually carries no more than 15 years' imprisonment. Assistant District Attorney Nick Noriea Jr. then used Hood's past convictions on Thursday to argue that he was a career criminal worthy of a severe punishment.

Drug offenders in the state are subject to life imprisonment after being convicted three or more times of a crime that carries a sentence exceeding 10 years.

Judge Raymond S. Childress graduated from Bogalusa High School in 1969, attended Southeastern Louisiana University and graduated in December of 1972 with a B.A. in History. He attended Loyola University Law School in New Orleans, graduating in May of 1979. After being admitted to practice law in October 1979, he went into private practice.

Judge Childress ran unopposed in 1998 and was sworn in as District Judge, Division "A" in the 22nd Judicial District Court in October 1998. He serves on the Louisiana District Judges Association Executive Committee. He presides over Drug Court in Washington Parish and currently chairs the 22nd JDC Family Court Committee.