I suggest Salvia Divinorum is being placed on Schedule I precisely because of the great potential for medical uses it presents.

"Schedule 1" scheme to lock up research

The founders of the United States of America set up a Constitution under which to deny a personal of fundamental rights of speech religion and freedom from imprisonment required, the government to have a very strong or compelling reason.

The question the legislature should address is whether there is a good reason to prohibit Salvia Divinorum and more significantly to imprison people for years. The legislation proposed putting Salvia on Schedule I which prohibits any medical research. Why did not one question arise in either the North Dakota House or Senate committees or on the House or Senate floor as to why Salvia had to have the highest scheduling and as a felony? Why not an infraction or a misdemeanor? I suggest Salvia Divinorum is being placed on Schedule I precisely because of the great potential for medical uses it presents. There are numerous independent and university researchers investigating Salvia right now. When it goes on Schedule I their research will stop forever. Only the largest members of the Pharmaceutical Cartel will be able to develop Salvia's medical potential when it suits them.

My name is kenneth Rau and i can be contacted at defendantkennethrau@yahoo.com 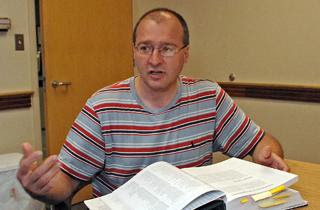 In April 2008 the case of Bismarck resident Kenneth Rau, a 46 year old bottling plant worker, was reported as likely being the first person charged for Salvia divinorum possession in the United States. He was arrested on April 9, 2008 when police searched his home looking for his adult son, who was on probation for drug charges.

Burleigh County States Attorney Cynthia Feland confirmed, "He is being charged with possession of salvia with intent to deliver". Rau suggests that this is a long used drug prosecutors ploy "to make dealers out of everyone," saying of his untreated leaf, "Nobody wants leaves. Everyone is buying those 10X and 20X and 30X extracts." [...] "I bought eight ounces of leaf on eBay by bidding $32 for it. Now they're charging me with possession with intent." [...] "This is ridiculous since an ounce is clearly the standard saleable unit for [untreated] leaf."

Rau's interest in salvia was reported as deriving from a broader interest in herbalism, religion and spirituality. - "I read that salvia facilitates lucid dreaming, so I tried chewing some leaves before bed time, and it was interesting because I would see faces and remember names I had long forgotten." He also tried salvia as a cure for depression. "I have some childhood issues to deal with. They had me on Paxil," he said. "They want you to take their pharmaceuticals, but if you want to take an herbal remedy, they want to throw you in prison. Are they going to save me from myself by throwing me in prison for years?"

Rau said his arrest has motivated him. "Maybe this is an opportunity for me to join the fight. I've never been a drug user, never been arrested. I started experimenting with this stuff because I thought it was legal. I didn't want to get into trouble, but now they're treating me just like some meth dealer." [...] "I've emailed the ACLU Drug Law Reform Project, but I haven't heard back from them yet."

The Drug Reform Coordination Network (DRCNet) reported that it had contacted Republican lawmakers, state Sens. Dave Oelke and Randel Christmann and state Rep. Brenda Heller, but none of the three legislators responded to requests for comment.[79]