Tobacco [and alcohol] versus safer substances 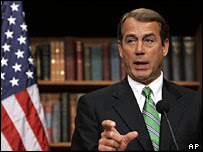 Congressman Boehner's remarks underscore the extreme hypocrisy of the U.S. Congress -- a body which regularly meets in the Basilica of Cornstalks and Tobacco Leaves -- regarding Tobacco versus infinitely safer agricultural commodities as Cannabis, Coca and Opium

Activities of U.S. government should qualify as a form of criminal racketeering of mercantilism

"Mr. BOEHNER … Now this bill has been hanging around here for 15 years. For 15 years, we've been trying to move this piece of legislation. We're going to charge the tobacco companies about $5 billion over the next few years to pay for a bureaucracy here in Washington so we can regulate tobacco.

$5 billion "over the next few years" to regulate a substance that takes 400,000+ lives annually is bad, but $50 billion annually primarily to maintain a prohibition against Cannabis which takes 0 lives is ....?

In June 1995, Boehner provoked contentions of unethical conduct when he distributed campaign contributions from tobacco industry lobbyists on the House floor as House members were weighing how to vote on tobacco subsidies.[7] Boehner stopped handing out the checks only "after being questioned about the practice by two freshmen who’d heard about the handoff on the House floor". Rep. Linda Smith (R-WA) said of Boehner’s actions, "[I]f it is not illegal, it should be."[8]. This pressure from within his own party forced him to apologize for handing out the checks.[9][10] He later led the effort to change House rules and prohibit campaign contributions from being distributed on the House floor.[11]

John Boehner on the Pharmacratic Inquisition