The 2008 U.S. Presidential campaign offers voters 3 better known choices, in addition to the 'mainstrean' 2 headed political party[s] of the 'Democrat' and 'Republican'; these are the:

“The principle of federalism seemed dead three years ago when the U.S. Supreme Court allowed the federal government to run roughshod over state laws permitting the medical use of marijuana,” says Bob Barr, the Libertarian Party presidential nominee.

Barr says the tide may be turning with the recent decision by U.S. District Court Judge Jeremy Fogel, who refused to dismiss a case by city and state officials against the federal government for raiding a medical marijuana group in San Cruz, California. “Keeping the case alive was significant enough,” notes Barr. “But Judge Fogel suggested that the Bush administration might have violated the Tenth Amendment of the Constitution in adopting a policy intended to effectively void California’s medical marijuana law."

As Judge Fogel explained, a trial must proceed on whether the federal government attempted to make ‘California’s medical marijuana laws impossible to implement and thereby forcing California and its political subdivisions to recriminalize medical marijuana.’ In short, says Barr, the courts may end up deciding that while the federal government may implement a policy that runs contrary to state rules in an area of traditional state authority, namely the criminal law, Washington may not work to overturn state law.

“After spending billions of dollars and arresting millions of people, we seem no closer to eliminating illicit drug use than we were at the start,” Barr says. “But we certainly have lost a lot of our freedom. While we might disagree about the best approach to problem drug use, we should be willing to accept the compassionate use of marijuana by those who are sick and dying. Certainly states have authority under the Constitution to allow doctors to prescribe marijuana as medicine. The federal government has no constitutional authority to interfere,” insists Barr.

Barr says that neither Sen. Barack Obama nor Sen. John McCain is willing to consider real change to current policy.

“Sen. Obama says the federal government shouldn’t interfere with state policy, but he says he doesn’t want to waste his political capital on the issue," Barr explains. "Sen. McCain was for respecting state authority before he was against it. Neither the Democratic nor the Republican presidential candidate is willing to put constitutional principle—or the lives of those who are suffering from AIDS, cancer, glaucoma, and more—before federal power."

Barr says as president, he would "direct the DEA to initiate, for the first time, a truly open and objective scientific evaluation of the medical potential of marijuana." Moreover, Barr says he would ensure that all federal officials, including those in the Department of Justice and Drug Enforcement Agency, respect the decisions of states that choose to allow the medical use of marijuana. Finally, Barr would undertake a comprehensive review of federal crimes, which have expanded far beyond the few narrow cases foreseen by the nation’s Founders.

"What the federal government does, it should do well, but it attempts to do far too much today," Barr says. "We must never forget that we are supposed to be living in a free society."

28. We call for decriminalization of victimless crimes. For example, the possession of small amounts of marijuana.

29. We call for legalization of industrial hemp and all its many uses.
30. We call for an end to the "war on drugs." We support expanded drug counseling and treatment.

The 10th Amendment states: "The powers not delegated to the United States by the Constitution, nor prohibited by it to the States, are reserved to the States respectively, or to the people."

The 4th Amendment states: "The right of the people to be secure in their persons, houses, papers, and effects, against unreasonable searches and seizures, shall not be violated, and no Warrants shall issue, but upon probable cause, supported by Oath or affirmation, and particularly describing the place to be searched, and the persons or things to be seized."

The Constitution Party will uphold the right of states and localities to restrict access to drugs and to enforce such restrictions. We support legislation to stop the flow of illegal drugs into these United States from foreign sources. As a matter of self-defense, retaliatory policies including embargoes, sanctions, and tariffs, should be considered.

At the same time, we will take care to prevent violations of the Constitutional and civil rights of American citizens. Searches without probable cause and seizures without due process must be prohibited, and the presumption of innocence must be preserved.

Posted by Douglas Andrew Willinger at 10:21 PM No comments: 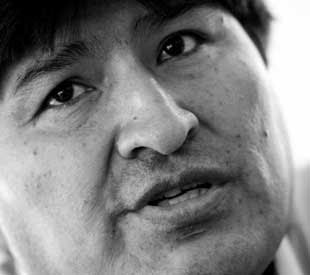 We understand why the Bush administration and Congress are fed up with Bolivia’s president, Evo Morales. Bolivia has become markedly less cooperative with American counternarcotics efforts, as evidenced by a large increase in coca cultivation. [earth to the New York Times: Coca is not a 'narcotic', but the deceived are certainly dopes- particularly with the criminal mercantilism for protecting the market in adulterated misbranded cigarettes] And Mr. Morales regularly stokes anti-Yankee sentiment to undercut his opposition and divert attention from his government’s poor performance. Last month, Mr. Morales expelled the American ambassador, Philip Goldberg. [Why not instead arrest Mr. Goldberg for working for criminal mercantilsim against Coca and for subverting the health of Bolivians with adulterated, misbranded US cigarettes?]

Congress was so annoyed that when it voted to extend Andean trade preferences last week, it limited tariff-free benefits for Bolivia and Ecuador (which is expelling the American military from the airbase in the coastal city of Manta) to six months, with the possibility of a six-month extension. The White House, meanwhile, is proposing to suspend Bolivia’s trade benefits altogether. That is self-defeating. It would undermine the anti-drug strategy — which seeks to wean poor farmers from the coca trade by opening the American market to other products — and play right into Mr. Morales’s hands.

Mr. Morales doesn’t tire of saying Bolivia will neither “retreat nor submit” to Washington’s will, and he has been talking up relations with Iran and Venezuela. After Bolivia was classified as uncooperative with American anti-drug efforts last month, the government in La Paz said it would seek help — and military helicopters — from Russia instead. Last week, it rejected an American request to fly an anti-drug plane over Bolivian territory.

Generally, it’s a bad idea to tie foreign aid programs that are in the American interest to the behavior of foreign governments. “Decertifying” unhelpful countries in the drug wars always seemed particularly wrongheaded, a surefire way to anger allies and undermine support for Washington’s objectives in Latin America.

The Bush administration seemed to understand this logic. When it blacklisted Bolivia last month, it also waived potential sanctions against the country. Unfortunately, the justified anger at the expulsion of Mr. Goldberg seems to be clouding that judgment. The administration should reconsider. 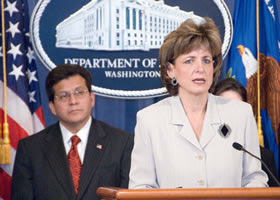 From Randy Balko at Reason:

Sandalio “Sandy” Gonzalez recently retired after a 32-year career in law enforcement, 27 as an agent for the Drug Enforcement Administration (DEA), at one point serving as its head of operations in South America.

Three years ago, Gonzalez’s career came to an abrupt end after he blew the whistle in a horrifying case now known as the “House of Death,” in which Immigration and Customs Enforcement (ICE) agents stand accused of looking the other way while one of their drug informants participated in torturing and murdering at least a dozen people in the border town of Ciudad Juarez, Mexico....

Rather than give up a drug operation (and apparently an unrelated cigarette smuggling operation), Gonzalez learned that federal agents had allowed a paid government informant to participate in a dozen brutal murders—all but the first of which could have been prevented.

When Gonzalez sensed that internal investigations of the case were headed toward a cover-up, he fired off a letter to his counterpart at ICE demanding he take responsibility. Gonzalez’s letter reached the highest levels of the Justice Department, including the desk of DEA Administrator Karen Tandy.

But instead of praising Gonzalez’s efforts to expose this egregious mishandling of a paid government informant, Tandy and other government officials reprimanded him for creating a record of ICE’s transgressions. Tandy and U.S. Attorney Sutton called Gonzalez “hysterical,” warning him not to talk to the media. They eventually forced him into an early retirement in 2005.

Posted by Douglas Andrew Willinger at 11:56 PM No comments: 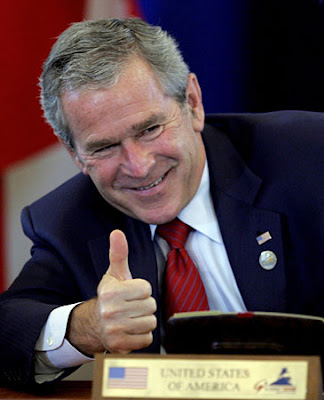 The real argument about F.D.A. pre-emption is not whether the Food and Drug Administration sets minimal or optimal standards. Rather, the issue turns on versions of the Watergate questions: What did a company know? When did it know it?

What did it do?

While these questions are tangential in Wyeth v. Levine, they are at the core of litigation involving drugs like Vioxx, Baycol, fen-phen and others. Did the F.D.A. have the information required to make reasonable assessments? Did companies allow the F.D.A. to do so?

The Levine case is an outlier. Hard as it is to believe, the Bush F.D.A. and the Department of Justice have asserted that drug companies should be shielded from civil liability even if F.D.A. approval is based on deliberately faked or hidden data. That is, even if approval is obtained through felony fraud.

That is the core issue regarding F.D.A. pre-emption. The rest is mostly distraction.

Posted by Douglas Andrew Willinger at 11:33 PM No comments: