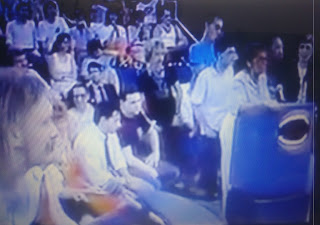 
Seizing upon the fatal overdose (cocaine) of Len Bias, a University of Maryland student and draft pick of the Boston Celtics in 1986, and in an orchestrated response to newspaper hyperbole, the bipartisan government of President Ronald Reagan and U.S. Speaker of the House William O'Neil, with rashly promoted legislation to further escalate the long-running drug war (started up during the years leading up to the start of World War I largely for the sake of making the world markets safer for cigarettes), by a so-called Anti Drug Abuse Act of 1986.

This spurred the entry of a bunch of us into the protest movement against the drug war.

We included Doug Greene and yours truly, meeting other more established protesters, and threading our way into a variety of venues.  Greene, lived in Cedarhurst, N.Y., on Long Island near the eastern edge of Queens, was an NYU under-graduate in psychology, and involved with the Libertarian Party. I was from New Rochelle, N.Y. in southeastern Westchester County, and was an incoming 1st year student at University of Bridgeport School of Law student, recently inspired to research the war on cocaine, as well as researching the story of the longest used and favorably regarded cocaine containing product prior to the start of the drug war- Vin Mariani and its creator Angelo Francois Mariani.

Doug and I met at a Libertarian Party event in White Plains N.Y. in April 1988.

I vividly recollect seeing him that first time with his name-badge, and immediately recognizing his name from an article he authored for the (now defunct) newsletter "Burning Issues" written and published by R.B. Wilks - an energetic anti-drug war female activist and for a time girlfriend of Libertarian Party activist (and former member of Young Americans for Freedom) Don Meinshausen.  His article against the drug war made the rarely made much needed point that the self perpetuating problem is not "drugs" but rather prohibitionist policies banning a substance in any and all forms without regard to potency/concentration, with the dynamics meaning safer, dilute, guaranteed low potency options are eliminated and replaced with infinitely riskier higher concentration/wildly variable potency.  Hence, Greene then advocated for legalizing Opium and Coca leaf, providing a welcome contrast to the standard group thought of thinking of "heroin" and "cocaine" concentrated white powders.

His name's irony was immediate and comforting.

Doug Greene, born March 13, 1967.  A man with a surname suggestive of his public stance for green plant drugs - Cannabis, Opium and Coca - as well as his advocacy of veganism.  And born a mere 3 months before the release of that Monkees song "Pleasant Valley Sunday" with its line "Mr. Greene, he's so serene, he's got a TV in every room"  - a prophetic description of a Mr. Greene into having the newest level of computer/operating system.

Greene interned that year at the Drug Policy Foundation, working under Arnold Trebach and Kevin Zeese. We both attended the 1988 NORML convention, held in a hotel on Wisconsin Avenue in upper Georgetown, Washington D.C.  And later that summer, Greene first introduced me to that most colorful personality and political protester long headquartered at 9 Bleeker in Manhattan, Dana Beal.  A longtime drug war opponent - he has a recording of him calling out George McGovern on the issue back in 1972 - Beal holds annual pro marijuana legalization marches the earliest Saturday in May; and he has his own approach to the drug war: highlighting its absurdity via his advocacy of the use of Iboga plant root bark alkaloid Ibogaine as a drug-addiction interrupter, as discovered by his longtime friend Howard Lotsoff in 1962, who tried Ibogaine and found his physical addiction to Heroin had vanished.

Greene and Beal would get seen to the world by getting on an episode of that unforgettably late 1980s icon of "trash-talk" television- The Morton Downey Jr. Show, named for its host. 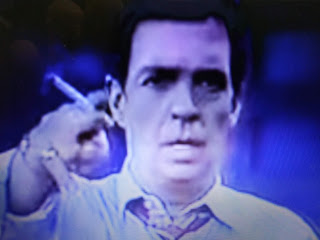 The show was started by WWOR of Secaucas, New Jersey, and first aired October 19, 1987.

It was textbook "trash-talk" - host with panelists and audience, with questions/statements from the latter permitted. It combined a variety of elements of "audience" shows from those devoted to matters as personal soap opera stories with its vast arrays of family feuds, into a show addressing political issues, with a design to provide a platform for dissident views, but in an arena so stacked as to have them effectively silenced with the moderator encouraged a raucous audience to chant the establishment mode of thought, regarding persons with ideas contra.  The show's early ratings successes lead to it being taken on national syndication in 1988.

Hmm, allow a platform for a few dissidents, but in a sort of arena where rather than their ideas receiving a fair and just consideration, instead are met with the most simplistic ridicule, representing that of the powers that be be here presented as the popular opinion that they seek to perpetuate.

Of course include those espousing status quo views.  For instance, Lisa Sliwa (Evers), then wife of the founder of the citizen vigilante organization the Guardian Angels, Curtis Sliwa. 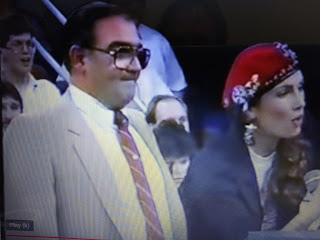 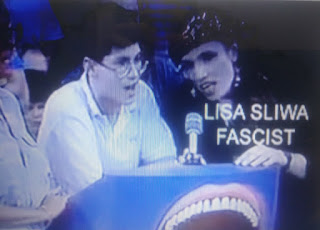 The episode that Greene and Beal appeared was that of July 4, 1988, featuring - as its best known speaker that day - Ron Paul, Congressman from Texas.. 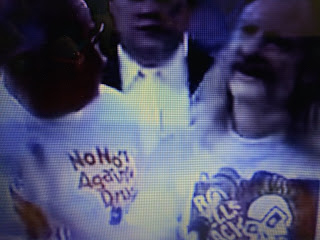 Posted by Douglas Andrew Willinger at 12:50 AM No comments: