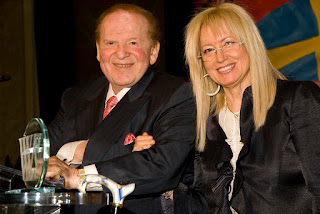 Sheldon Adelson and his 2nd and current wife Miriam

Is worth $28 billion, and the 18th wealthiest person on the planet.  Is a casino and media magnate and philanthropist.


- chairman and chief executive officer of the Las Vegas Sands Corporation, which owns the Venetian and the Palazzo in Las Vegas, Nevada, the Sands Bethlehem in Bethlehem, Pennsylvania, Sands Macau in Macau, China, and the Marina Bay Sands in Singapore and the parent company of Venetian Macao Limited which operates The Venetian Resort Hotel Casino and the Sands Expo and Convention Center.

- owner of the Israeli daily newspaper Israel Hayom, and the Las Vegas Review-Journal.[3]

- donates to a variety of causes, with his wife's initiative, the Adelson Foundation.

- a former supporter of the Democrat Party who now supports the Republican Party, who describes himself as "liberal on several social issues"

Is quite anti Marijuana, even anti Medical Marijuana


Spent $5 million of his own money on political campaign to defeat a relatively restrictive 2014 Florida initiative to legalize Medical Marijuana for "debilitating diseases".

Has reportedly pressured the editorial board of the Las Vegas Journal Review to reconsider their pro Marijuana stance.

Is said to be anti Marijuana as he view it as a "gateway" substance to other illicit drugs.  Never mind the relative safeties, and that the criminalization of Marijuana or any other drug is a man made condition, is not something intrinsically pharmacological, and that most Marijuana consumers don't graduate to say injecting heroin.  If it were instead alcohol that were illegal, would he then oppose its legalization on the grounds that it was a 'gateway' substance to heroin use?

Is rabidly pro drug war as a personal passion for his son Mitchell - one of his three adopted children with his 1st wife Sandra who he divorced in 1988 -- who died of a drug over dose, who was said to have used cocaine and heroin from an early age, never-mind that it is prohibition that both shifts the availability and uses of these drugs into their most potentially dangerous concentrated forms and modes of administration.  For instance, cocaine, a stimulant, has never been actually been shown to be more dangerous than other naturally occurring in plants stimulants as caffeine and nicotine when used in like dilute forms, with Coca leaf regarded as very safe; that even caffeine can be quite deadly as a concentrated powder.  Supporters of our cocaine prohibition as this hopelessly confuse dilute and highly concentrated forms and modes of cocaine and its use.

Adelson should recognize the effects of drug prohibition, as he ironically claims to be pro free market!  For instance, in 2012, the Nevada Policy Research Institute, a think tank in Las Vegas, gave him its Chairman's Award for his efforts to advance free market principles in Nevada.[48]

Suggested readings for Sheldon Adelson & Co. about prohibition's effects upon drug use


With Trump surrounding himself with such rabid drug war supporters as Melvin Sembler and Sheldon Adelson, the former associated with coercive outfits as Straight Inc that has kidnapped youth for the sake of 'saving' them from Marijuana, the latter with bankrolling political campaigns to defeat Medical Marijuana legalization initiatives in Florida, it seems al the more likely that a Trump Administration would be rabidly pro continuing and even intensifying the drug war.

To his credit, Trump has come out at least in favor of medical Marijuanna.

One can pray that a President Trump would  be guided by God to rule wisely.