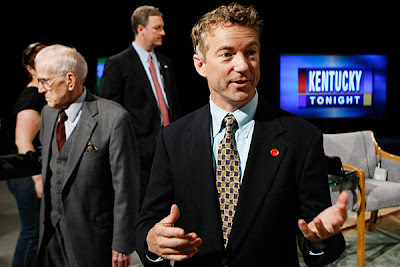 Many readers have been questioning the accuracy of an Associated Press article I blogged about recently claiming Kentucky GOP Senate candidate Rand Paul, who has defended the rights of states to pass medical marijuana laws, “is opposed to the legalization of marijuana, even for medicinal purposes.”

As a former reporter, I always strive for accuracy, so I just got off the phone with a representative of the Paul campaign in order to clarify the candidate’s position — which isn’t as simple as the AP made it out to be.

“Doctor Paul’s stance has not changed, and that is a case of sloppy reporting,” said Nena Bartlett, Paul’s assistant campaign manager. “His position is that it’s a states’ rights issue.”

However, when I asked Bartlett if Paul personally supports medical marijuana laws, and would, for example, vote for a bill protecting patients from arrest if he were a member of a state legislature, she demurred.

“I’m actually not positive that he’s taken that stance,” Bartlett said. “He just believes it should be left up to the states … I’m not sure if that’s a position he would take at this time. It’s a decision for doctors and patients at the local level.”

So there we have it. Rand Paul believes the federal government should not interfere in state medical marijuana laws. But he does not support such laws himself, at least not at this time. It was therefore inaccurate for the AP to say he “is opposed” to medical marijuana laws. (Though the Paul campaign will not say he’s “in favor” of them either.) I regret having helped to spread that misinformation, and want to apologize to our readers.

MPP’s blog — like nearly every other one online — relies almost entirely on outside news organizations to provide us with information that we then analyze and make entertaining for our readers. As this episode demonstrates, sometimes news outlets get it wrong—even ones as old and esteemed as the AP. With that in mind, I hope our readers will appreciate where we’re coming from, and understand that we will always do what’s in our power to promote accurate information — and correct something when it’s wrong.

The expenditure of billions $$$ annually for a constitutionally criminal, immoral 'drug war' designed as market protection and initially pushed through the U.S. government via the U.S. Department of Agriculture is somehow OK if run by the various States rather then the Federal (national) government? Also note is utter failure to condemn MJ and other drug prohibition, nor dare say he would oppose it as a state legislature.

This sort of intellectual dance and cowardice, IMHO reeks of a fraternal order racketeering to protect various markets as long as they can.

That something as 'Virginia Bright Leaf' cigarettes, of a variety of the plant designed to provide little psychoactive satisfaction while being 'smooth' to be drawn deeply into the lungs, and described as more physically addictive then injected heroin, and sold with 100s of additives designed to increase usage (aka burn accelerants) and health problems and house fires, taking some 440,00 lives annually in the U.S. alone is "legal", while MJ, Coca and Opium which take no lives (unless made highly more concentrated then as they exist in nature- with their use likewise perverted) are "illegal"?

To me this reeks of an international shadow government, as plainly hidden in open site, as one the $1 bill, back and to the left, and via the label of the #1 brand of this Virginia Bright Leaf cigarette "dope".

Asking about the fraternal order membership -- note that many college fraternities were founded by masons, along with their logos' assorted masonic and roman catholic imagery -- of any political candidate, occurs with Rand Paul, along with that of his father, Ron Paul (the 1988 U.S. Libertarian Party and a candidate for the U.S. Republican Party presidential nomination in 2007).

As it should with any others.


.
Posted by Douglas Andrew Willinger at 12:28 AM No comments:

(TPTB- The Powers That Be)

http://continuingcounterreformation.blogspot.com/2010/08/times-green-spin-against-evo-morales.html
Posted by Douglas Andrew Willinger at 3:00 AM No comments:

A Texas asthma sufferer who went to California for a medical marijuana recommendation and then got busted in June on a Texas highway with small amounts of marijuana and hashish is facing up to life in prison after being indicted by a Brown County grand jury. He is charged with possession of a controlled substance with intent to deliver, a first-degree felony in the Lone Star State.

Diaz was pulled over for an expired license tag while en route from California to Austin, and according to the DPS trooper's report, could not produce a drivers' license or proof of insurance. He was then arrested for failure to identify, and during a subsequent search, police found a small amount of hashish on his person. A search of the vehicle then turned up more hash and marijuana in pill bottle from a California medical marijuana provider.

The DPS report said the search also turned up a cell phone "containing text messages referring to drug sales" and a notebook with "drug and law writings." Those are apparently the basis, legitimate or otherwise, for the drug distribution charge.

Texas does not have a medical marijuana law, and its authorities do not recognize having a recommendation from another state as a defense against prosecution.

Diaz has attracted supporters both inside Texas and nationally. The Texas Coalition for Compassionate Care and a group called I Am Sovereign are publicizing the case and pressuring Brown County officialdom. And the asthmatic Diaz sits in jail in Central Texas awaiting trial, without his medicine.
Brownwood, TX
United States
See map: Google Maps
Permission to Reprint: This article is licensed under a modified Creative Commons Attribution license.
Looking for the easiest way to join the anti-drug war movement? You've found it!

Medical Marijuana Patient Faces Life in Prison for a Half Ounce

The cannabis laws are insane! With hundreds of millions of us taking this amazing healing caring spiritual substance, you'd think that the laws would lighten up!

Prisoners being held for the peaceful, non-violent possession, sale, transport or cultivation of cannabis hemp must be released immediately. Money and property seized must be returned. Criminal records must be wiped clean, amnesty granted and some sort of reparations paid for time served. These cannabis prisoners are the real victims of this monstrous crime against humanity called the “War on Drugs.”
The United States is supposed to be a free country, yet those who choose to smoke or eat this mostly harmless drug are penalized. An American can go out and drink themself to death, but they cannot freely use a drug which is less toxic and less prone to making one out of control than alcohol. I say this is not only unfair, but also un-American!
The police, prosecutors and prison guards should not be in charge of which herbal therapies people may use to treat their personal health problems.
Federal Judge Francis Young in 1988 called “one of the safest therapeutically active substances known to man.”

END_OF_DOCUMENT_TOKEN_TO_BE_REPLACED
Posted by Douglas Andrew Willinger at 2:26 PM No comments: