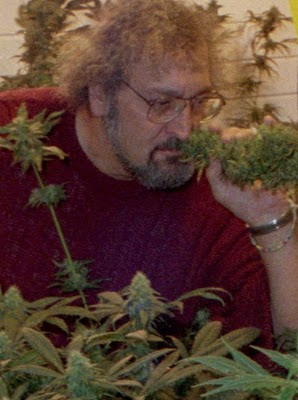 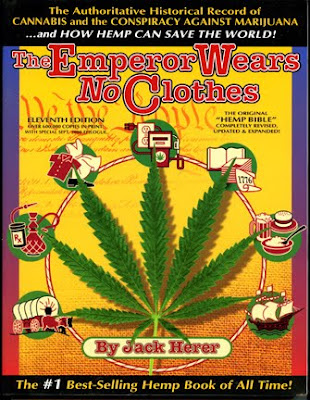 Herer exposed the criminal mercantilist roots of the prohibition of MJ, revealing the commercial potential of the Cannabis Hemp plant, with his landmark book "The Emperor Wears No Clothes".

Jack Herer (June 18, 1939 – April 15, 2010) was an American cannabis activist and the author of The Emperor Wears No Clothes, a book which has been used in efforts to decriminalize cannabis.

A former Goldwater Republican, Herer was a pro-cannabis (aka, marijuana) and hemp activist. He wrote two books, the aforementioned The Emperor Wears No Clothes and Grass. There has also been a documentary made about his life called, The Emperor of Hemp. He believed that the cannabis sativa plant should be decriminalized because it has been shown to be a renewable source of fuel, food, and medicine, and can be grown in virtually any part of the world, and that the U.S. government deliberately hides the proof of this. He devoted his life to the support of cannabis, hemp and marijuana.

A specific strain of cannabis[1] has been named after Jack Herer in honor of his work. This strain has won several awards, including the 7th High Times Cannabis Cup. Jack Herer was also introduced to the Counterculture Hall of Fame at the 16th Cannabis Cup in recognition of his first book.[2]

In July 2000, Herer suffered a minor heart attack and a major stroke, resulting in difficulties speaking and moving the right side of his body.[3] Herer mostly recovered, and claimed in May 2004 that treatment with the amanita muscaria, a psychoactive mushroom was the "secret".[4]

On September 12, 2009 Herer suffered another heart attack while backstage at the Hempstalk Festival in Portland, Oregon.[5] He spent nearly a month in critical condition in a Portland hospital, including several days in a medically induced coma. He was discharged to another facility on October 13, 2009. He is "waking up and gazing appropriately when someone is talking... but he is not really communicating in any way."[6] He died aged 70 on April 15, 2010 in Eugene, Oregon, from complications related to the September 2009 heart attack.[7][8]

The following is a video of Jack at that September 2009 Hempstalk shortly before his heart attack.

Here's a video trailer for "The Emperor Wears No Clothes"

Jack was into digging up the forgotten history of MJ; note the grey leaves in the following illustration available at his site: http://www.jackherer.com/ 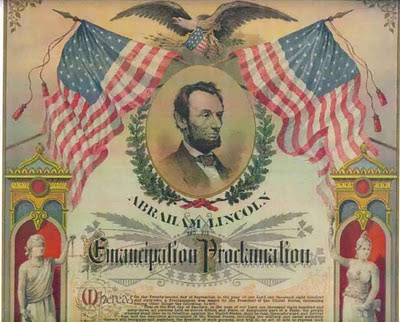 The Emperor Wears No Clothes

This is the book that started the hemp revolution. More than 600,000 copies have been sold to date. The print version of The Emperor Wears No Clothes is available in Jack's Hemporium. Jack wants this information to be available to everyone, so he has published the text of the book here on the internet for free. This is only half of what is actually in the book. If you want all the source material and graphics, please buy a copy of the book.

By selling his books, tapes, c.d.s, and movies, Jack has been able to help support the hemp movement for the last 20 years.

Chapter 1 - OVERVIEW OF THE HISTORY OF CANNABIS HEMP

Chapter 2 - BRIEF SUMMARY OF THE USES OF HEMP

Chapter 7 - THERAPEUTIC USE OF CANNABIS

SOME OF THE SOURCE MATERIALS IN THE BACK OF THE BOOK:

Reign of Law: A Tale of the Kentucky Hemp Fields, 1900

Documentation of authenticity for "Hemp for Victory"

"Can We Have Rope Without Dope?" Popular Science, 1943

"Radioactivity: The New-Found Danger in Cigarettes," 1986

"The Marijuana Conviction," The Birth of Prohibition, 1987

Summaries of Research Papers on Hemp

Police States: Prohibition Through the Ages

HR 4079 and Its Parellels with Nazi Germany

"Science and the Citizen," Scientific American, 1990

ALL SOURCE MATERIALS ARE IN THEIR ENTIRETY AND VERY READABLE AND MOSTLY IN THEIR ORIGINAL FORM, PICTURES INCLUDED.

Virtually the only legal medical cures allowed the people of Western Europe by the Roman Catholic Church Fathers at this time were:

1. (a.) Wearing a bird mask for plague. (b.) Setting fractured bones or cleaning burns.

2. Bleeding pints and even quarts of blood from all flu, pneumonia or fever patients (victims) which was the most used treatment in Europe and America by doctors until the beginning of the 1900s. It does not work! And did not work no matter how much blood they took.

3. Praying to specific saints for a miraculous cure, e.g., St. Anthony for ergotism (poisoning), St. Odilla for blindness, St. Benedict for poison sufferers, and St. Vitus for comedians and epileptics.

4. Alcohol for a variety of problems.

In 1484, Pope Innocent VIII singled out cannabis healers and other herbalists, proclaiming hemp an unholy sacrament of the second and third types of Satanic mass. This persecution lasted for more than 150 years. Satanic knowledge and masses, according to the Medieval Church, came in three types:

•To summon or worship Satan;

•To have Witch’s knowledge (e.g., herbalists or chemists) of making, using or giving others any unguent or preparation including cannabis as medicine or as a spiritual sacrament;

•The Mass of the Travesty, which can be likened to “The Simpsons,” “In Living Color,” rap music, Mel Brooks, “Second City-TV,” “Monty Python,” or “Saturday Night Live” (Father Guido Sarducci-type group) doing irreverent, farcical or satirical take-offs on the dogmas, doctrines, indulgences, and rituals of the R.C.Ch. mass and/or its absolute beliefs.

Because medieval priest bureaucrats thought they were sometimes laughed at, ridiculed and scorned by those under their influence - often by the most learned monks, clerics and leading citizens - ingesting cannabis was proclaimed heretical and Satanic.

Despite this centuries-long attack by the most powerful political and religious force in Western civilization, hemp cultivation continued in Northern Europe, Africa and Asia. While the church persecuted cannabis users in Europe, the Spanish Conquistadors were busy planting hemp everywhere around the world to provide sails, rope, oakum, clothes, etc.

The sadistic Ottoman Empire conquered Egypt and, in the 16th century A.D., tried to outlaw cannabis - because Egyptian hemp growers along the Nile were leading tax revolts. The Turks complained that cannabis use caused Egyptians to laugh and be disrespectful to their Sultan and his representatives. In 1868, Egypt became the first modern(?) country to outlaw cannabis ingestion, followed in 1910 by white South Africa to punish and stop the blacks practicing their ancient Dagga cults and religions.

In Europe, hemp was widely used both industrially and medicinally, from the Black Sea (Crimean) to the British Isles, especially in Eastern Europe. The papal ban on cannabis medicines in the Holy Roman Empire in 1484 was quite unenforceable north of the Alps, and to this day the Romanians, Czechs, Hungarians and Russians dominate world cannabis agronomy.

In Ireland, already world famous for its cannabis linen, the Irish woman who wanted to know whom she would eventually marry was advised to seek revelation through cannabis.

Eventually, the hemp trades once again became so important to the empire builders who followed (in the Age of Discovery/Reason, the 14th to 18th centuries) that they were central to the intrigues and maneuverings of all the world’s great powers.

The Age of Enlightenment

The 18th century ushered in a new era of human thought and civilization. “Life, Liberty and the Pursuit of Happiness!” declared the colonists in America. “Liberty, Equality, Fraternity!” replied their French cousins. The concepts of modern constitutional government, which guaranteed human rights and separation of church and state, were unified into a policy designed to protect citizens from intolerant and arbitrary laws.

In his landmark essay, On Liberty, Ogden Livingston Mills, whose philosophy shaped our democracy, wrote that “Human liberty comprises, first, the inward domain of consciousness in the most comprehensive sense: liberty of thought and feeling, scientific, moral or theological, …liberty of tastes and pursuits.”

Mills asserted that this freedom of thought or of “mind” is the basis for all freedoms. Gentleman farmer Thomas Jefferson’s immortal words, “I have sworn upon the altar of God eternal hostility against every form of tyranny over the mind of man,” are engraved into the marble of his Memorial in Washington D.C.

Abraham Lincoln was an avowed enemy of prohibition. His wife was prescribed cannabis for her nerves after his assassination. Virtually every president from the mid- 19th century up until prohibition routinely used cannabis medicines (See Chapter 12: 19th century use).

Close acquaintances of John F. Kennedy, such as entertainers Morey Amsterdam and Eddie Gordon* say the president used cannabis regularly to control his back pain (before and during his term) and actually planned on legalizing “marijuana” during his second term - a plan cut short by his assassination in 1963.

Posted by Douglas Andrew Willinger at 4:44 PM No comments:

So shall Coca-Cola follow suit- either over trademark infringement, or bringing back true the 'original formula' with whole Coca and sugar?

A coca-based soft drink went on sale in Bolivia this week. Coca Colla, made from the coca leaf and named after Bolivia's indigenous Colla people [Quechua, Aymara and other Incas descendants], is the latest manifestation of President Evo Morales' quest to expand legal markets for coca products. 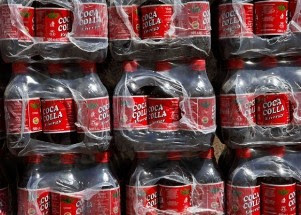 The first batch of Coca Colla, about 12,000 half-litre bottles going for $1.50 each, went on sale in La Paz, Santa Cruz, and Cochabamba. Like Coca-Cola, it is black, sweet, and comes in a bottle with a red label. Unlike Coca-Cola, which originally used full-fledged coca leaf extract but began de-cocainizing it early in the company's history, Coca Colla is the real thing.

While Morales' government has vowed zero tolerance for cocaine, it has encouraged Bolivian companies to use coca in products including tea, syrups, toothpaste, liqueurs, candies, and cakes. The Bolivian government backed Coca Colla from the beginning. If Coca Colla and other coca products take off, the government could expand the amount of land authorized for legal coca production from the current 30,000 acres to as much as 50,000 acres.

Five years ago, Paez indigenous people in Colombia launched a coca-based soft drink, Coca Sek. But that drink was banned in 2007 following pressure from the International Narcotics Control Board (INCB), which enforces the international drug treaties that consider coca a drug. No word yet from the INCB on Coca Colla.

Posted by Douglas Andrew Willinger at 3:57 PM No comments: