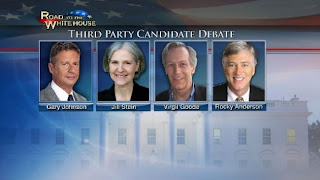 Jill Stein was perhaps the best with her position to ”let science decide”.  It allows her to explicitly endorse cannabis, while offering an objective hope for legal liberalization for other substances from Coca and opium to iboga-ibogaine.  As a basic principle, this should also mean that Tobacco and alcoholic beverage products loose their exemption from retail product labeling laws


Gary Johnson was good for declaring his support for legal Cannabis.


Less than good though is his fear to go further, combined with his questionable over-generalizing/ fear-mongering more akin to something from prohibitionists concerning the ‘untouchable’ illegal drugs, most notably “cocaine”- it “puts holes in peoples’ hearts” stated Johnson, who notes his “addiction” to running and healthy living.


Why not instead spotlight prohibition promoting cocaine in its worst forms while eliminating the safe forms- think about prohibition’s iron law as described by Richard Cowan in the December 1996 National Review “How the narcs created crack”.  Should not Johnson say something about Coca leaf?  Should not its benign use at increasing endurance interest him- especially if he’s out to spotlight prohibition, rather than some drug without regard to form and dosage?!  Indeed, Johnson knows this from yours truly at numerous Drug Policy Alliance conferences.  Yet Johnson neglects informing people that prohibition promotes drug abuse- hence limiting liberalization to MJ rather than plant drugs, hence subject gating actual matters of scientific objectivity to the hysteria of the prohibitionists which must disregard matters of relative safety between the dilute preparations generally found with substances that are legal versus the concentrates that prohibition favors- all for the sake of using a mask of hysterics that people can not understand the differences between say drinking coca or opium tea versus sorting smoking or injecting concentrated cocaine, employed clearly for maintaining the double standards required for these agricultural mercantilism schemes.  So we’ll liberalize the laws regarding concentrated cocaine while doing nothing regarding domesticated cocaine aka low potency coca leaf and otherwise dilute cocaine products.  It bespeaks the dynamics of a deference to entrenched mercantilist – commodity interests, whether Coffee, Tobacco or Petroleum- of the mega-costly anti Tobacco habit cure of coca USDA/AMA-APhA/Harvey Wiley/ James Harry Covington pharmaceutical-cigarette mercantilism.


Virgl Goode of the “constitution party” utterly is anything but pro-constitution, at least regarding that of the U.S.A., with his overall loyalty to prohibition, limiting his criticism to the Federal government’s  annual cost of enforcement, giving a seriously low such figure of .  Though he would provide comic relief with this support with his southern Virginia accent almost as a spoof on prohibition as what I really is- cigarette market protection!  Just continue the pretense- making your commonwealth’s courts into criminal entities dedicated to subverting health for the sake of protecting virginia’s coffin nails.
Posted by Douglas Andrew Willinger at 6:30 PM No comments: 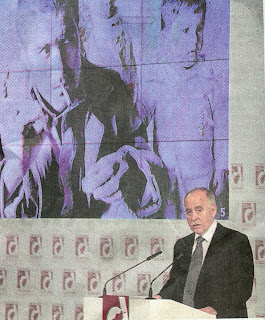 This photo from the October 24, 2012 ‘Russia Today’ advertising supplement - of Russia’s ‘Drug Czar’ Viktor Ivanov - next to photo of man smoking a tobacco cigarette next to a child- frames it succinctly
It's captioned “Ivanov speaks at a forum on fighting drug production in Afghanistan”.

Ought to captioned – “Ivanov speaks at forum on Protecting Cigarettes and Vodka From the Market Threat of Safer Substances”-  “Protecting cigarette markets by kidnapping-extorting people with Opiates, MJ and “cocaine”.
Pushes the cigarette-pharmacratic mercantilism-inquisition.  Is he part of some conspiracy to make Russia look exceptionally stupid, particularly with its true leading drug problems of alcohol (primarilPeople like to conflate the existence of a monolithic entity of “drugs”.
That disregards the existence of many drugs, including the many that are not illegal- if it were a war on drugs then why only on some, and without regard to actual matters of pharmacology and pharmacokinetics.  You know- comparing by comparable forms.  Such as a plant infusion versus a plant infusion.  A concentrated white powder or sulfate versus another such white powder or sulfate, and particular mode of administration.   Rather than a double standard of a plant infusion of one drug versus an ultra concentrated dosing of another drug.  Say drinking coffee or caffeine containing tea.  Or smoking Tobacco one way or another.  Versus snorting, smoking or injecting concentrated cocaine or morphine or heroin.  But what about drinking coca or smoking opium?  Or drinking or eating opium or coca?   We only have about 25 years of coca cigarettes, denying a longer term study of their health effects – though a sufficient to know they were not crack cocaine- aka not an abuse problem.  Nor were the coca beverages, even those made with isolated cocaine appropriately diluted down.  Nor really were opium products- asides from being physically addictive like coffee or especially Tobacco.  Yet we have this universal deference to a serious double standard established circ. 1906.  Coca-cocaine and Opiates are targeted as extra dangerous requiring all sorts of intrusions and bureaucracy making.  Nevermind that the “laws” from then on equating coca and otherwise dilute cocaine with concentrated cocaine simply shifted markets for the worse.  And they call the war on some drugs a war on drug abuse?  Or a strike for public health?  Really?  When it bans the substances that take no lives in their natural forms and potencies- and for the sake of the market protection of alcohol and cigarettes the latter taking nearly half a million lives annually each in the USA and Russia?!
Yet Tobacco cigarettes in particular are green lighted; in the USA with a 1906 FDA excluding tobacco from its purview while giving the dictatorial power to the US Department of Agriculture!
If one cares about the abuse of concentrated drugs- they are actually promoting such by supporting the status quo.
Take some Blast caffeine concentrate. Or some nicotine.  Adulterate it with some other white powder to ensure one does not know the exact purity.  Jack up the price to encourage its most efficient re direct use.  Watch the differences between taking such drugs that way.  See the health problems cause by say switching to injecting a drug- as that’s the most effective way especially when the drug’s price is jacked up by the prohibition. Watch the drug treatment quacks salivating over the business generated by such modes of drug taking.  We could make tobacco illegal as opiates and coca-cocaine are now, and adopt a methodone model.  Imagine that making people who can now purchase nicotine chewing gum at drug stores instead go to special nicotine maintenance clinics, which restrict take home doses, so one is addicted to the clinic.  Imagine adopting the same model making Tobacco and concentrated nicotine equally illegal by gross weight.  Think about the LSD carrier weight issue.  These “laws” equate an inactive ingredient with the accompanying relatively if not entirely inert co-ingredients, e.g. potentially making an 8 ounce cup of coca tea as ‘illegal’ as ½ pound of cocaine hci or sulfate.  What a waste of money and time.  But what a jobs creator!  Just lie to yourself.  Forget it’s a scam, and instead delude yourselves by calling it a moral crusade- while in reality it's anything but.
For the sake of Russia, it's an invaluable means to subvert human health and human rights for the sake of making it safe for cigarettes and vodka.

Posted by Douglas Andrew Willinger at 10:08 PM No comments: