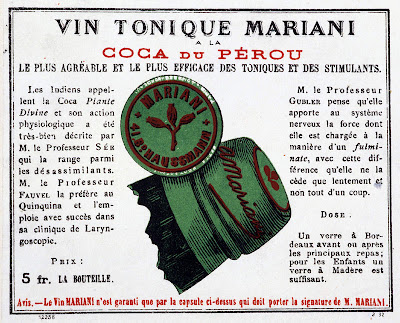 
The wonderful properties of Coca are daily becoming more known, both as a general tonic and as a special fortifier of the throat and voice.

Coca (Erythroxylon Coca) is not, as is often supposed, Cocoa, but a shrub very much resembling Tea. It grows wild in South America, and is cultivated in Bolivia and other parts especially lor its leaves, which contain its Tonic and Ktitoralirt properties. Various methods have been tried for extracting these properties, but nothing has been found to succeed so well as a maceration of the leaves in wine.

A generous Bordeaux, of particular vintage and special character, has been employed in its manufacture. The reasons for its selection are that it contains only just the proportion of alcohol absolutely necessary to extract and hold in permanent suspension the mucilaginous, resinous, and essential atoms of the leaves, besides which it contains in its natural state small quantities of Iron and Tannin, which add to its general properties, but do not derange the digestive organs, or upset the system by the unpleasant astringent properties of most tonics. Further reasons are, that the wine when thus prepared is of very agreeable taste and pleasant aroma, and that it still contains the comforting and nutritious properties of a good Bordeaux. Unlike Quinine and many medical wines it can be taken for any length of time without fear of inflammation, or injury to the gastric juices. The beneficial effects of Vin Mariani have already been noticed in medical works, where it has been recommended to actors, barristers, clergymen, orators, singers, and to all who make great demands on the throat and voice.


Forms a very agreeable, and, according to the clinical experience of physicians in France, as well as in England, a very useful nervine stimulant. The value of Coca as an element of economy, as Manaud has judiciously named it, and as a similarly active agent in restraining waste, has been insisted on by Sir Robert Chrislison and many others. Coca wine is largely prescribed and used in France ; and it has been found generally valuable as a remedial agent in cases of nervous exhaustion, over-study, or excessive mental exertion. It has a certain reputat1on for enabling athletes to perform fatiguing feats without the usual amount of bodily waste, and will certainly be found considerably to alleviate the distress often incurred by students and others who are called upon to make considerable mental efforts.—British Medical Journal, May 5th, 1881.


We can speak very highly of Mariani's Wine as the most palatable and efficient preparation of coca leaves which has come under our notice. It is within our knowledge that when adm1nistered t , persons suffering from nervous exhaustion and extreme mental and bodily fatigue, it has proved most grateful and restorative. Singers, public speakers, students, and others, have found relief from mental and bodily strain from its use, and we arc inclined to think, as it becomes better known in England, it will be much more extensively employed.—Medical Record, June 15, 1881.

" Dear Sirs,—As I have derived great benefit from the use of Mariani Coca Wine (taken some twelve months ago under medical advice,', I have no hesitation in recommending it as a vocal restorative to all who have to use their voice professionally. " Very truly yours,


At the special recommendation of Dr. Lennox Browne, of London, I have tested carefully the " Vin Mariani, " and I recognize that its splendid eflfect upon the voice is extremely satisfactory, and almost instantaneous. For over two years I have tried it, ordering it to my pupils, both ladies and gentlemen, whom I had under my care for the development of the voice, and I have invariably remarked that when-ever they had any difl&culty in singing or elocution, the " Vin Mariani" enabled them to continue the lesson, which, without it, would have been utterly impossible. I have thus every reason to be glad that my attention was called to this wonderful preparation, and am convinced that all artists and orators will welcome it and be happy to adopt it.


The late Dr. Elsberg recommended " Vin Mariani " to me when I had been suffering with hoarseness from a severe cold, and had a long New England tour before me. I found it to act like magic upon my vocal organs. I found it also an excellent nervine. I consider Mr. Mariani a benefactor to public speakers and singers.


After having given the " Vin Mariani " a fair trial, I have found it very beneficial for my exhausting profession, " teaching singing." It strengthens not only my voice, but my whole nervous system, that I can go through my heavy daily work.


It is with much pleasure that I send you my testimonial for your " Vin Mariani " and your " Elixir  Mariani." During my professional career, I have been compelled to use both preparations, and know from experience that they are far ahead of any others manufactured. For toning the system and stimulating the vocal cords, they have no superior. I have come to rely upon them almost entirely, both during the many fatiguing hours of teaching and the various concerts I am called upon to participate in.

It is with special pleasure that I testify my most thorough appreciation of the excellent properties of the "VIN MARIANI." I have carefully watched its splendid effect upon the vocal bands, the mucous membranes, and the entire vocal apparatus, as likewise on the d'gestive organs and the system in general. I take it in small glassfuls before meals, and also occasionally during the day as a gargle, where it has proved itself most effective.


VERY cheerfully I state that I would never be without " Vin Mariani," and that since I used same, never have suffered from hoarseness.


I have found nothing to so thoroughly effect its purpose as the "Vin Mariani."


I consider your " Vin flariani " a most excellent tonic for both singers and speakers.

I would like to recommend to every singer, or any one going before the public, the use of the most delightful ''VIN MARIANI." I am never without it ; it is always on my dressing-table