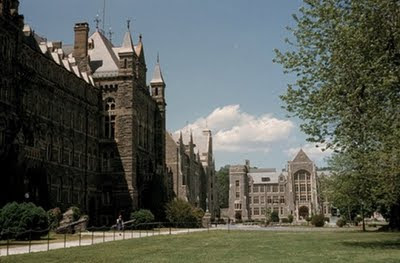 WAR ON DRUGS: Paul would immediately end the war on drugs. All dangerous drugs would be legal if they were approved by a state government.[29]

It was written by Gregory Hilton, of the Georgetown University School of Foreign Service National Security Studies Program, and appears within an article of his "The Case Against Ron Paul", at his blog "The DC World Affiars Blog"

The blog is described as:

This Blog is focused on students in the National Security Studies Program, the DC Diplomatic Community, and anyone else who has assisted my course, "The United States in World Affairs.".

The term National Security Studies Program has been in use since 1965, but the official launch was in March of 1977 when Georgetown University established a program under that banner. At the same time the American Security Council’s Congressional Conference Center became an off campus center for Georgetown, and the university emblem was displayed at the entrance of the estate. The NSSP then offered a Master’s Degree in International Security Affairs which was jointly conducted by Georgetown and the Department of Defense, with ASC’s assistance.

This first Director and the founder of the program was by Dr. Stephen P. Gibert. He was then and remains to this day a professor of government at Georgetown. The NSSP was then the only advanced degree-granting program in national security studies in the United States and Europe. The faculty was composed of experts in the field, and classes were held in the Pentagon on weekdays, and at ASC’s Conference Center on weekends. ASC also provided over $1 million in financial assistance for the NSSP.

The first class of forty students was enrolled in September 1977. They were scheduled to graduate in June of 1979 with a Master of Arts degree in government and a Certificate in National Security Studies. Beginning with the first group, the classes were generally made up of equal numbers of military officers, and civilians from government agencies.

Some were sent by the services of other countries; a fair percentage already were advanced degree holders or graduates of the service War Colleges. It was hoped that the horizons opened for them by their acquaintance with national security and strategy would have in time a significant impact on policy as those individuals rose to positions of prominence. To obtain a Master’s Degree the student had to be enrolled at Georgetown, and they had to meet the universities vigorous requirements.

The 25th anniversary of Georgetown’s National Security Studies Program was held in 2001, and the University honored ASC with an impressive plaque and presentation. The 25th anniversary was also a decision time for ASC. Veteran Chairman John M. Fisher had often expressed his desire to step down from the programs many administrative burdens, and it was clear the NSSP had outgrown the Congressional Conference Center. The Center will always be an important part of the NSSP’s history, but its primary drawback was that is was located too far away from the nation’s capital (a 79 mile drive), and it was only able to accommodate 60 residential students.

The Georgetown University program is today known as the Peace and Security Studies Program, and it is part of the Edmund A. Walsh School of Foreign Service. The new Security Studies Program is awarding doctoral degrees. When Georgetown renamed its program, ASC kept the original name. For ASC the program began with annual conferences in the 1950′s and it was expanded steadily over the years to include a Fall, Spring and Summer Semester.

When potential students contact me I always refer them to the Application Form. This should be downloaded and sent to us along with your resume, and a writing sample (preferably a paper you have already submitted for academic credit). A letter of recommendation is also useful, particularly if it is from a Member of Congress, a Foreign Service Officer, a U.S. Flag Officer or a former member of the Peace Corps.

The “Frequently Asked Questions” section will hopefully address many of your concerns...

Gregory Hilton's blog does not have a tag for anything regarding the drug war, coming only as close as a tag for "Health Policy" which nonetheless fails to address the 'drug war'. Hilton's field appears to be primarily security related matters, as can be expected from Georgetown University, founded and run by the Roman Catholic Jesuit Order in 1789 (during the period of time 1774-1814 when the Order was officially 'suppressed'), and where the U.S. 'PATRIOT Act was crafted.

Concerning his brief attention given in his anti Ron Paul piece to the 'drug war' I suggest this reading list for Professor Hilton:

Instead of what I have written as a blogger, starting out with my initial South Capitol Mall blog in 2006, and as a drug policy, Coca Leaf history researcher since 1987, we get this overly simplistic, overly generalized muddled slop. It comes out throughout the MSM. Its style is found in publications particularly as "Readers' Digest" examplified (concerning the 'drug war') by Yale's David Musto- that blur the reputations of Coca and highly concentrated cocaine. Alas this comes out also through the 'prestigious' & expensive educational institutions, adhering to a sacred doctrine of white is black and black is white Soviet style brainwashing, coalescing as a within the Beltway fortress that festers upon deliberately confusing/misinterpreting ill effects of what it does, as somehow justifying throwing more good money and lives down the multi-trillion dollar continuing mega boondoggle of the ‘drug war’ , particularly Jesuit Georgetown University, the virtual fist in the glove of the U.S. State Department.

All distracting from the broader picture of manipulative political control- mercantilism.
Posted by Douglas Andrew Willinger at 11:00 PM