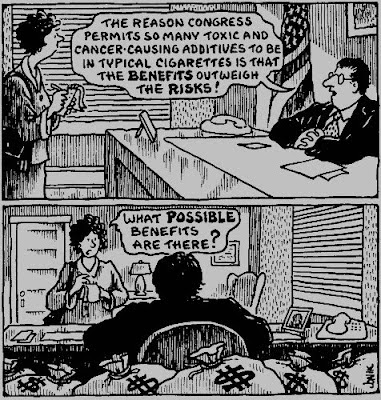 The Contaminated Cigarette Cartel
The health danger from typical cigarettes is more likely not from tobacco, but from industrial substances they contain
Just what is this so-called "Big Tobacco"?

The term "so-called" is necessary because, according to hundreds of US patents, cigarettes may contain no tobacco at all but, instead, various kinds of industrial waste cellulose (or blends thereof) made to "simulate" tobacco. On many cigarette packages. The word "tobacco" isn't to be found.

As an informed critic, you can think of typical cigarettes not as "coffin nails" of tobacco, but rather as "Dioxin Dowels," "Pesticide Pegs," or "Radiation Rods." Certainly do not think of them as tobacco. Mother Nature is not the villain here.

Big Tobacco is not just a handful of cigarette manufacturers. It consists of many pesticide, oil and pharmaceutical firms, and more. We are talking about Dow, Shell, Exxon/Mobil, Novartis, Aventis, Bayer, Uniroyal, duPont, Rohm & Haas, and on and on.

The US General Accounting Office (GAO) in 2003 condemned lax government oversight of tobacco pesticide residues in cigarettes, tobacco being the sixth most pesticide-drenched crop in the country. Oddly, this slam on the much-reviled cigarette industry was nowhere to be reported on virtually all anti-smoking sites, and was barely mentioned in the corporate media.

These pesticide firms have not faced any bans on supplying cigarettes with known toxins and known human carcinogens. Industry-serving legislators, however, backed by industry-linked "doctors," prefer to place legal burdens onto the victims, the unwitting, unprotected, insufficiently-warned smokers, and on non-complicit bar/restaurant owners and others in the form of public smoking bans.

This is an evasion of legal liability. That so many business proprietors willingly bear this cross for the cigarette industry is a mystery.

Big Tobacco could also be called Big Chlorine by way of the many chlorine pesticides, chlorine-bleached cigarette paper, and other chlorine-contaminated cigarette constituents. Burning this stuff produces dioxin, a US-acknowledged Known Human Carcinogen, and the worst of the "Dirty Dozen" persistent organic pollutants (POPs) facing a global ban mandated by the Stockholm Convention, a treaty that was signed even by the US. That it is still permitted in cigarette smoke, arguably the worst possible delivery route, is a crime of great enormity. That anti-toxics activists don't question or condemn this is another great mystery.

No corporate or government officials can explain their way out of this one. Unfortunately, tragically, none are asked to try.

In cold deference to the chlorine industry, of Agent Orange and Love Canal fame, there isn't so much as a chlorine/dioxin warning label on a cigarette package. This crime becomes more clear when one notes that many, or most, so-called "smoking related" diseases cannot possibly be caused by any natural plant, even tobacco, but are already well-known effects of dioxin.

Dioxin and the pesticides and bleaches aren't blamed for the health catastrophes. The victims, the smokers, are. Even "healthful" corporate-fighting, leftie/progressives, sadly, join the attacks. In this case, inconsistently, they believe the corporate media.

Big Tobacco is also the paper, logging and pulp industry, not only with its chlorine-bleached paper but also with some types of fake tobacco. Loblolly pine and "carbon-filled paper" are just two cellulose sources for "tobacco substitute material," otherwise known as fake tobacco.

For kicks, you can go to the patents website

then type in the following patent numbers to see examples of tobacco substitute and filler products, and who owns the rights to them:

Incidentally, the timber industry is also the source of acetate, the material of beach and highway-littering cigarette filters. God forbid they volunteer to help with, or are required to fund, clean-ups.

Big Tobacco is also Big Agriculture, as many substances on lists of the thousand or so non-tobacco cigarette constituents are farm and food products. None have been tested for this use. Chances of this stuff being pesticide-free are roughly zero.

Big Tobacco is also Big Sugar. The Wall Street Journal itself noted once that a Marlboro can contain a whopping 12.3% sugar. No wonder the kids like them. And there's no list of ingredients to tell you what type of sugar or artificial sweetener is used.

With so much "concern" for the kids, it's of more than passing interest that no "anti-smoking" group has yet to complain about this, to question the safety of smoking these additives, or to demand instant removal of kid-baiting ingredients. Could it be that "anti-smoke" groups are keeping attention away from the real criminal and liability areas.

Big Tobacco includes Big Chocolate. Chocolate and cocoa are common cigarette additives. Coffee is in there too, despite popular condemnation of addiction.

Big Tobacco includes Big Phosphates: the phosphate mining industry, a large presence in Florida, that contributes tobacco fertilizers that are contaminated with uranium tailings (Polonium 210, specifically), thus sending cancer-causing radiation to the furthest corners of an uninformed, unprotected victim's lungs. There's no ban on this even though no-less than former Surgeon General C. Everett Koop once warned that this radiation is the cause of most upper respiratory "smoking related" cancers. (See: http://en.wikipedia.org/wiki/Health_effects_of_tobacco_smoking for an extensive explanation of radioactive carcinogens in cigarettes.)

The phosphates and citrates industries also supply cigarette makers with burn-accelerating substances to keep the products from self-extinguishing when untended. Despite thousands of so-called "smoking related" home fires and forest fires, injuries and deaths, the burn-accelerants are still permitted. To remove them now would indict the cigarette makers all the more, extend the indictment to the citrates/phosphates industries, and undermine the "wholesome" crusade to dump blame onto the victims.

To remove these fire-starting accelerants would also lower the rate of cigarette consumption, something not exactly wanted by regressive tax-hungry officials.

Above all of these cartel members stands Big Insurance which has already been outed for being a huge multi-million dollar investor in cigarette makers. Likely it invests in most or all of the other members of the cartel. It's easy to see why such insurers prefer to blame the victims for "smoking," rather than the cigarette cartel for their toxic manufacturing crimes.

Since most lawmakers are also economically beholden to part or all of this cartel, they also prefer the "smoking ban" route to one that protects consumers from secret product adulteration. The thought of saving lives and protecting health by removing the known deadly non-tobacco cigarette components isn't tolerated. To do that would return vast fortunes to the public (for health programs and otherwise) and do great (deserved) damage to some of the most health-damaging and environmentally destructive industries on the planet.

Whether or not one likes smoke, smoking, or smokers, and despite whatever natural inherent risks there may be from smoking even the purest tobacco, it remains that this "anti-smoking" crusade is a packaged, "for your protection", seemingly "anti corporate" fraud that covers up the misdeeds of the very industries that are and have been responsible for damaging the health of every person on earth (through contaminated cigarettes and many things otherwise), not to mention effects on wildlife and entire ecosystems.

It is a fraud that has undermined our medical, scientific and legal systems through endemic conflicts-of-interest. It's a fraud, not unlike "Reefer Madness," that aims at taking from the public another "sinful" public-domain plant, and that portends another Prohibition. It's a fraud aimed at keeping many billions, if not trillions, of dollars in compensation, penalties and forfeited profits from the general public and from victims.
The Contaminated Cigarette Cartel now enjoys illegitimate exemption from enormous penalties and liabilities. The seemingly punitive "tobacco settlements" provided barely a slap on their collective wrist, and were, in any case, ultimately paid by price hikes on the victims.

Though advertised as aimed at "protecting workers", the bans on smoking in public establishments are quite something else. The wholesomely-wrapped prohibitions are about enabling the cigarette industry to avoid the maximum penalties and liabilities for, among other things, many decades of harming workers with secretly-added toxic, cancer-causing, addiction-enhancing, and fire-causing non-tobacco cigarette ingredients.

Posted by Douglas Andrew Willinger at 4:26 AM