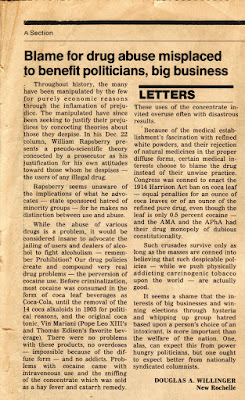 Throughout history, the many have been manipulated by the few for purely economic reasons through the inflammation of prejudice. The manipulated have since been seeking to justify their prejudices by concocting theories about those they despise. In his Dec. 22 column, William Rapsberry presents a pseudo-scientific theory concocted by a prosecutor as his justification as his justification for his own attitudes towards those whom he despises- the users of any illegal drug.

Rapsberry seems unaware of the implications of what he advocates - state sponsored hatred of minority groups - for he makes no distinction between use and abuse.

While the abuse of various drugs is a problem, it would be considered insane to advocate the jailing of users and dealers of alcohol to fight alcoholism- remember prohibition? Our drug policies create and compound very real drug problems- the perversion of cocaine use. Before criminalization, most cocaine was consumed in the form of coca leaf beverages as Coca-Cola, until the removal of the 14 coca alkaloids in 1903 for political reasons, and the original coca tonic, Vin Mariani (Pope Leo XIII's and Thomas Edison's favorite beverage). There were no problems with these products, no overdoses - impossible because of the diffuse form -- and no addicts. Problems with cocaine came with intravenous use and the sniffing of the concentrate which was sold as a hay fever and catarrh remedy. These uses of the concentrate invited overuse often with disastrous results.

Such crusades survive only as long as the masses are conned into believing that such despicable policies - while we push physically addicting carcinogenic tobacco upon the world - are actually good.

It seems a shame that the interests of big businesses and winning elections through hysteria and whipping up group hatred based upon a person's choice of an intoxicant, is more important than the welfare of the nation. One, alas, can expect this from power hungry politicians, but one ought to expect better from nationally syndicated columnists.

Time to Legalize Some Drugs
http://freedomofmedicineanddiet.blogspot.com/2013/05/time-to-legalize-some-drugs.html


Posted by Douglas Andrew Willinger at 2:30 AM