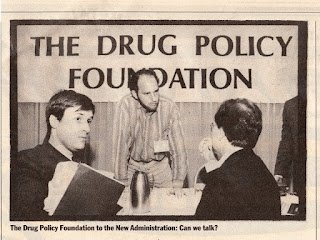 The time has come for me to step aside as executive director of the Drug Policy Alliance.
This is just about the toughest decision I've ever made but it feels like the right time for me personally and also for DPA. It's almost twenty-three years since I started The Lindesmith Center and approaching seventeen years since we merged with the Drug Policy Foundation to create DPA. We've grown from little more than an idea into a remarkable advocacy organization that has built, led and defined a new political and cultural movement.

Transitions like this are never easy but I am confident that DPA will continue to flourish. Our finances are strong and our donor base more diversified than ever before, with new sources of potential funding rapidly emerging. The talent, experience and commitment of staff and board are extraordinary. Our mission and vision are as relevant today as when we started, even as our many victories present new challenges and opportunities.

I've been thinking about making this transition for almost two years, for all sorts of reasons: passing the age at which my father died; the prospect of turning sixty, as I will six weeks from now; my growing sense of multiple missions accomplished, as evidenced by transformations in public opinion, our political victories, and the rapid expansion of our organization and movement; and also, I must say, by a desire for new adventure and challenges. Even as I've imagined, with both trepidation and anticipation, different futures for myself, I've made no plans or commitments.

Most of you have heard me compare our drug policy reform movement to other movements for social justice and individual liberty – notably those for women's rights, civil rights and gay rights – and describe each as inevitably a multi-generational struggle. I am immensely proud to have played the role I did in the first generation of our movement and to know that there are so many exceptional people who will lead – indeed, are now leading – the second generation. It's time now for a new person to assume the leadership of DPA and take this organization and our cause where they need to go.

I had strongly hoped and assumed, as I came to this decision, that Donald Trump would not be our next president. That development did indeed give me pause but not change my mind. His administration will surely hamper our progress at the federal level but do little to undermine our progress and prospects in the states and cities where so much of our work has focused. And there are always, as we've learned from experience, unique opportunities that arise when our opposition is clearly defined and when it overreaches, as it inevitably will.

We are extraordinarily fortunate to have a strong board as well as a chairman, Ira Glasser, who knows and loves DPA deeply. He and I have agreed on a target date of late April for me to step down, at which point, I am pleased to say, DPA's former deputy executive director, Derek Hodel, has agreed to serve as interim executive director until my successor is in place. The search for that person now commences.

My greatest regret in making this move is the prospect of missing you. My admiration and respect for the work you've done, and the passion, commitment and superb judgment you've demonstrated again and again, truly knows no bounds. I'll dearly miss our comradery and our shared struggles. But I'm not going far, and nothing will give me greater pride and joy than to watch DPA grow into an ever more powerful advocate for drug policies grounded in science, compassion, health and human rights!

The interim executive direction, Derek Hodel served previously as the DPA's Deputy Executive Director from March 2006 to July 2011. According to his linkin profile:

Derek Hodel is a longtime social justice activist and nonprofit executive. For the past 28 years, he has held a variety of senior positions for HIV- and drug-policy organizations in New York and Washington, D.C., and operated a consulting practice serving foundation, government, and nonprofit social service organizations. He currently resides in Toronto, Ontario.
Experience

CTAC is Canada's civil society organization addressing access to treatment, care and support for people living with HIV. CTAC's mission is to identify, develop and implement policy and program solutions promoting treatment access and to respond to the health and human rights of Canadians living with HIV and viral hepatitis.

The International Treatment Preparedness Coalition is the world's leading community-based movement of people living with HIV and their supporters who are united in promoting access to treatment. ITPC members include community organizations, local NGOs, researchers, and activists with strong expertise in HIV treatment, HIV co-infections, health systems and related issues. For nearly a decade, ITPC has advocated for treatment access and promoted treatment literacy, ensuring that PLHIV actively shape their own futures and lead productive lives. Through a global secretariat in NYC, ITPC supports nine regional networks in Africa, Asia, the Caribbean, Eastern Europe, and Latin America.

Responsibilities included management of day-to-day operations (50+ staff and $10 million budget) and the development and implementation of systems to promote program integration and increase accountability.

GMHC is the world's oldest and largest AIDS service organization.

The PWA Health Group was an activist organization dedicated to improving access to experimental AIDS treatments. Focus Features recently commissioned a history of the PWA Health Group in conjunction with its release of Dallas Buyers Club: http://www.focusfeatures.com/slideshow/new_york_city_buyers_club

Nadelmann, along with Ira Glasser are long-time participants in the Drug Policy Alliance (DPA), as well as the predecessor organization, the Drug Policy Foundation (DPF).  Both have featured prominently in the various DPF and DPA conferences, such as this opening session from the 1989 DPF conference. 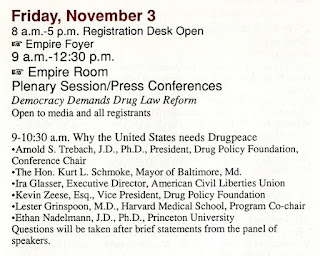 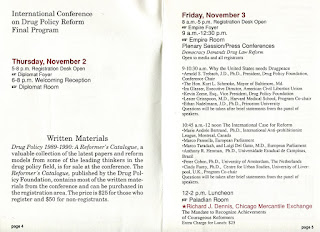 Nadelmann appears on the DPF Advisory Board list in that organization's 1988-1989 Biannual Report.

I have known Nadelmann for more than a quarter century through my activism, including attending these conferences that I started attending regularly in 1989, and appeared on a panel with him in 1992. 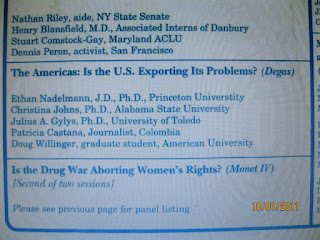 The DPF did a decent job during its early years, following its 1986 founding, and into the early 1990s.


However, after 1992, the DPF became increasingly 'conservative' insofar as becoming more restrictive in what they allowed at their conferences.

Although adopting the lexicon of "harm reduction" the DPF would narrow presentations to things as methadone, while denying coverage of natural substances other than Cannabis and some psychedelics.


There are those that have already expressed opinions about Nadelmann consistent with that of this blog Freedom of Medicine and Diet, such as the comment found on the DPA's very post with the Nadelmann resignation letter:

In May2000 I wrote a story published by AlterNet entitled, "Pot Shrinks Tumors; Government Knew in '74." It won a Project Censored award and resulted in my having to go into hiding to safeguard myself and my family. In the ensuing 17 years exactly zero national pot activist "leaders" have followed up in any meaningful way on the federal government's documented suppression of research revealing cannabis' anti-cancer properties. As far as I'm concerned, Mr. Nadelmann won't be missed. He mostly wrote the same things over and over again, recycling material from other sources and refusing to address the central issues of pot prohibition: how many people is it killing every day? How many people has prohibition killed in the past 50 years? Does pot really cure cancer and is that why the DEA and its puppet, the UN drug office, have blocked human trials worldwide for nearly 50 years? Let's hope his successor will be less concerned with who sits in the White House and more concerned with having the courage to get to the bottom of the DEA's conspiracy to keep people sick on behalf of Big Pharma. Obama had the chance to reschedule pot. He didn't. Hillary Clinton had no intention of rescheduling either, and Mr. Nadelmann knows it. Clinton was on record as an ardent prohibitionist. Bon voyage, Mr. Nadelmann. Enjoy your retirement. The rest of us will continue to fight.


Having been involved with the DPA since its inception, and its predecessor entity the DPF since 1989, I agree with this assessment.

A fair question remaining unanswered is the influence upon the drug policy reform movement of that major pharma-tobacco law firm of Covington & Burling. It was founded by a Congressman with some involvement with starting drug prohibition, who started that firm which had as its first client the Grocery Manufacturers' Association. And it has long been involved with advising groups as the DPF/DPA/MPP and perhaps others:

My son was diagnosed with epilepsy at the age of six and had become quite recluse, I was terrified. “His seizures have never been fully controlled as he had grand mal seizures, collapsing and twitching on the ground. As a little kid, I find each one haunting—as if some outside force has taken over his body, leaving me, the person who is supposed to protect him, powerless. It was 2012 and over the previous three years I had spent more time in hospital than out of hospital. This point in time was, looking back, perhaps the low point of my life. After nine years we were out of options. We met with his Doctor to get permission to try a herbal treatment as we needed to end all Conventional Medications. Though we didn't know if it Would make him vomit or become dizzy, or give him a rash or cause some other unpleasant event like some medics he used to take? We didn't know. We’d volunteered to give a trier for him to live a better life. We were confident the medicine wouldn't kill him or hurt him irreversibly, but the prospect still made us nervous. Although family and friends may feel this is a loss of the person they knew, the illness can be treated and a good outcome is possible as it all got better when we started using a herbal medicine for him.

My recommendation to people who are either wondering if they have epilepsy or wondering if a friend or loved one has epilepsy should contact aparajitatan@gmail.com. I think one of our key problems was that we didn't do this in the early days of my Son's illness as we never thought of a natural alternative for him.