Satanic US Republican Party: Disregard the Constitution for Criminal Mercantilism Against Medical Marijuanna 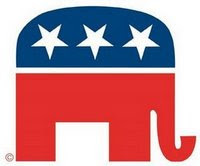 Note the orientation of the stars- point down
Design change was reportedly adopted in 2000, the year of GW Bush's 'election'

US GOP -- the so-called "Republican" Party -- attacks Obama for insufficient support of the criminal pharamacratic inquisition against State laws permitting some medicinal use of Marijuana.

“Barack Obama’s pledge to stop Executive agencies from implementing laws passed by Congress raises serious doubts about his understanding of what the job of the President of the United States actually is. His refusal to enforce the law reveals that Barack Obama doesn’t have the experience necessary to do the job of President, or that he fundamentally lacks the judgment to carry out the most basic functions of the Executive Branch. What other laws would Barack Obama direct federal agents not to enforce?”

But The Presidential Oath Of Office Requires The President To “Preserve, Protect And Defend The Constitution Of The United States”:

The Presidential Oath Of Office, As Specified In Article II, Section I Of The U.S. Constitution: “I do solemnly swear (or affirm) that I will faithfully execute the Office of the President of the United States, and will to the best of my ability, preserve, protect and defend the Constitution of the United States.” (U.S. Department Of State Website, usinfo.state.gov, Accessed 5/14/08)

And The Supreme Court Has Upheld Regulations On Medical Marijuana:

The Supreme Court Ruled In 2001 And 2005, Affirming The Authority Of Congress To Regulate The Use Of Marijuana. “In 2001, the Supreme Court affirmed Congress’s 1970 judgment about marijuana in United States v. Oakland Cannabis Buyers’ Cooperative et al., 532 U.S. 438 (2001), which held that, given the absence of medical usefulness, medical necessity is not a defense to marijuana prosecution. Furthermore, in Gonzales v. Raich, 125 S.Ct. 2195 (2005), the Supreme Court reaffirmed that the authority of Congress to regulate the use of potentially harmful substances through the federal Controlled Substances Act includes the authority to regulate marijuana of a purely intrastate character, regardless of a state law purporting to authorize ‘medical’ use of marijuana.” (U.S. Drug Enforcement Administration Website, www.usdoj.gov, Accessed 5/14/08)

Amazing. The GOP supports a supreme court ruling utterly at odds with its earlier rhetoric regarding the constitutional doctrine of federalism, and reliant upon the infamous 1942 FDR court supreme court case Wickard v Filburn, which extended the concept of regulating interstate commerce -- that is, commerce between states -- to actions not only within a particular state, but within a piece of private property.

Here the GOP supports subverting the constitution's 9th and 10th amendments, for the sake of supporting the criminal mercantilism of the pharmacratic inquisition (drug war).

How about some creative uses of the Hobbs Act -- banning violent and coercive acts against business people -- and the RICO Act, against these acts of criminal mercantilism for big pharm and big tobacco?

Imagine that scientists at a major drug company announced the discovery of a new drug, clinically proven to be effective in the treatment of symptoms of glaucoma, multiple sclerosis, AIDS and migraines, all with moderate short term side-effects and no long term ones. The drug has no potential for overdose and no risk of physical dependence. Now imagine that the United States government deemed this substance to be medically worthless, classified it with the most dangerous and addictive narcotics and, along with state and local governments, proceeded to spend over $30 billion a year attempting to eradicate it. more...

Ladies and Gentleman, what the government is doing with its "drug war" is criminal mercantilism. We need not only free and pay restitution to all of the people kidnapped (arrested) and extorted (prosecuted or prosecuted and incarcerated), we need to arrest, prosecute and even incarcerate the perpetrators.
Posted by Douglas Andrew Willinger at 9:58 PM