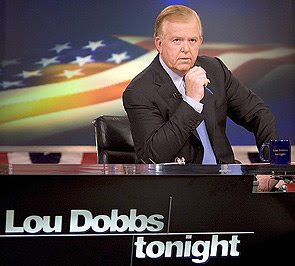 Lou Dobbs- Media Whore
Yesterday I walked in on my Mom watching CNN, and came upon this person "Lou Dobbs" talking about that criminal GW Bush's latest meeting with some puppet government 'leader' in Central America about the criminal pharamacratic inquisition that's called the 'drug war'.

Having not watched CNN in years, I was simply amazed at the loads of BS that Dobbs pushes upon his viewers.

He lies through his teeth in saying that the government needs to 'start' getting serious about this 'drug war.

He does this in complete disregard to

- the pharmacological issues. For instance Marijuana people must be persecuted simply because criminal apostate governments made it illegal, and never mind that making things as cocaine illegal only shifted the drugs' use to hyper glycemic concentrated forms of drug takings, such as crack versus Coca beverages. Of course while he blabs about addiction and death, he somehow can't bring himself to mention the adulterated and misbranded cigarettes that get a free pass as 'legal' substances.

He behaves as a man who has utterly debased himself simply to obtain and retain a likely overpriced job, against a backdrop of imagery of US flags to hypnotize the more impressionable that Lou Dobbs, as he subverts the public liberty and health, is somehow being 'patriotic'

Lou Dobbs Thinks You're a Fool
Posted by Douglas Andrew Willinger at 2:11 AM