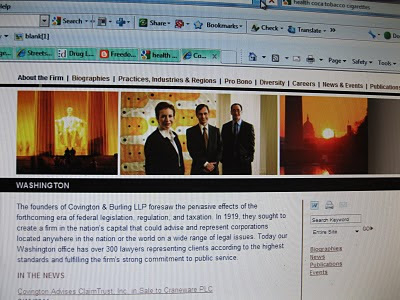 "The Multidisciplinary Association for Psychedelic Studies (MAPS) has received free legal representation in a lawsuit against the DEA over a license to grow marijuana for federally regulated research.

The D.C.-based law firm Covington & Burling LLP, one of the foremost law firms representing the pharmaceutical industry, has offered pro-bono legal representation to the research group to appeal the DEA’s August 15 final order in the First Circuit Court of Appeals. MAPS estimated the law firm saved them $175,000 in legal costs.

The DEA rejected University of Massachusetts professor Lyle Craker request to obtain a license to grow marijuana to study its potential medical uses, claiming that the National Institute on Drug Abuse (NIDA) can be the only one to supply marijuana for Food and Drug Administration (FDA)-regulated research."

The Drug Policy Alliance conference schedule devotes significant time to Marijuana, but with weirdly little for Coca , (even in 2011 the year Bolivia denounces the 1961 'narcotics' conference, with Covington & Burling, already known for advising the DPA predecessor DPF); doing significant work upon Marijuana, but nothing as far as I know regarding Coca, despite the tremendous potential for good.

Commonwealth v. Hutchins. We represent Mr. Hutchins and the interests of similarly situated patients for whom the medical use of marijuana is necessary, in a variety of state and national initiatives aimed at decriminalizing such use. We work closely with the Drug Policy Foundation, the Marijuana Policy Project and sympathetic members of Congress and selected state legislatures. American Civil Liberties Union - Drug Policy Litigation Project. We were asked to assist the ACLU in preparing a letter to the Drug Enforcement Agency in support of an application by a professor at the University of Massachusetts for registration to manufacture or distribute controlled substances for the purposes of a scientific study on medical marijuana. Specifically, they requested that we opine on the consistency of the application with the United States' treaty requirements pursuant to the 1961 Single Convention on Narcotic Drugs. We have continued to provide advice on related aspects of this matter.

That the firm would use the present tense

Posted by Douglas Andrew Willinger at 12:14 AM

Covington & Burling could and should be invaluable towards legalizing Coca.