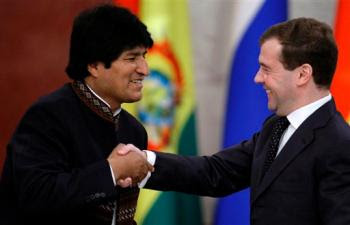 Morales told reporters on Friday that he would discuss the immediate purchase of helicopters and loans of other aircraft to fight coca production when he visits Russia.

"However, there will be a private meeting with the Russian president before signing any agreement," Morales said, Itar-Tass reported. "We need to decide for sure how and in what periods of time we can move forward."

Morales was to arrive in Moscow on Sunday and meet with President Dmitry Medvedev on Monday.

On Tuesday, Morales will be awarded an honorary doctorate.

Bolivia is the third-largest producer of illegal coca, the main ingredient for cocaine, after Colombia and Peru. Coca leaves also have traditional and religious uses in Bolivia.

Morales on Friday accused Washington of violating international conventions on the "shared responsibility" in the drug war.

And then there is the following:

Bolivia to get Russian helicopters to fight drugs

By STEVE GUTTERMAN – 11 hours ago

The moves were part of Moscow's push for more clout in Latin America. Bolivian President Evo Morales became the first leader from the landlocked, Andean nation to visit Russia since Moscow and La Paz established diplomatic relations in 1945.

Morales and Russian President Dmitry Medvedev signed a declaration emphasizing their similar positions on global issues and opposition to U.S. policies including the decades-old embargo against Cuba, plans for a missile shield in Europe and NATO expansion.

Morales praised the resurgence of Russian attention to Latin America, where Medvedev has courted Soviet-era allies and others in a bid to increase Moscow's influence and further its economic interests. He met with Morales in November during a regional tour that included Venezuela, Brazil, Peru and Cuba.

"Russia's return to the region is very important," Morales said at a joint news conference.

Medvedev said Russia's activities in Latin America are not aimed at undermining the U.S.

But plans to provide Bolivia with helicopters follow disputes with Washington over anti-narcotics efforts that badly strained Bolivia's ties with the Bush administration.

Morales expelled the U.S. ambassador in September and suspended operations of the U.S. Drug Enforcement Administration, which he accused of spying. Before leaving for Moscow, he said he would discuss the immediate purchase of helicopters and loans of other aircraft to fight production of coca, the main ingredient in cocaine.

Medvedev and Morales oversaw the signing of agreements calling for cooperation in the arms trade and anti-narcotics efforts. Medvedev indicated Russia expects to reach a deal to provide helicopters soon.

"We hope that implementation of the first large contract, for the supply of Russian helicopters to Bolivia, will begin in the very near future," Medvedev said.

Medvedev did not say how many helicopters Moscow might provide, but Russia's top arms sales official, Mikhail Dmitriyev, suggested that it would be fewer than 20.

Dmitriyev said Venezuela is also interested in other Russian weapons, and that Russia might loan Bolivia money to buy the helicopters and other arms, the state-run RIA-Novosti and ITAR-Tass news agencies reported.

"We are talking about the Russian side helping our friends from Bolivia in the development of hydrocarbons and the construction of a gas transport system on the territory of Bolivia," Medvedev said. AP

Would not opening up Russian markets to Coca products be far more valuable- why no apparent discussion of Bolivia, Russia and other nations formally denouncing the U.S. Single Convention that bans Coca?