What Phelps Really Ought to Say!

Mere hours after I post
What Obama Really Should Do!,
Radley Balko of the Agitator posts the following piece
(and NORML comes up with the following graphic) 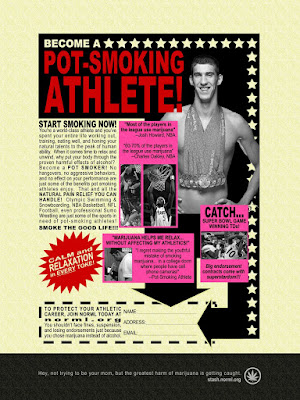 It is good to see such mind-synchronization

I have reproduced it below with an edit that replaces the word "dope" in reference to a particular plant -- with the word Cannabis, as the term dope here is really only applicable to this immoral pharmacratic inquisition' s average supporters.

I take it back. I don’t apologize.

Because you know what? It’s none of your goddamned business. I work my ass off 10 months per year. It’s that hard work that gave you all those gooey feelings of patriotism last summer. If during my brief window of down time I want to relax, enjoy myself, and partake of a substance that’s a hell of a lot less bad for me than alcohol, tobacco, or, frankly, most of the prescription drugs most of you are taking, well, you can spare me the lecture.

I put myself through hell. I make my body do things nature never really intended us to endure. All world-class athletes do. We do it because you love to watch us push ourselves as far as we can possibly go. Some of us get hurt. Sometimes permanently. You’re watching the Super Bowl tonight. You’re watching 300 pound men smash each while running at full speed, in full pads. You know what the average life expectancy of an NFL player is? Fifty-five. That’s about 20 years shorter than your average non-NFL player. Yet you watch. And cheer. And you jump up spill your beer when a linebacker lays out a wide receiver on a crossing route across the middle. The harder he gets hit, the louder and more enthusiastically you scream.

Yet you all get bent out of shape when Ricky Williams, or I, or Josh Howard smoke a little Cannabis to relax. Why? Because the idiots you’ve elected to make your laws have have without a shred of evidence beat it into your head that smoking marijuana is something akin to drinking antifreeze, and done only by dirty hippies and sex offenders.

You’ll have to pardon my cynicism. But I call bullshit. You don’t give a damn about my health. You just get a voyeuristic thrill from watching an elite athlete fall from grace–all the better if you get to exercise a little moral righteousness in the process. And it’s hypocritical righteousness at that, given that 40 percent of you have tried pot at least once in your lives.

Here’s a crazy thought: If I can smoke a little Cannabis and go on to win 14 Olympic gold medals, maybe pot smokers aren’t doomed to lives of couch surfing and video games, as our moronic government would have us believe. In fact, the list of successful pot smokers includes not just world class athletes like me, Howard, Williams, and others, it includes Nobel Prize winners, Pulitzer Prize winners, the last three U.S. presidents, several Supreme Court justices, and luminaries and success stories from all sectors of business and the arts, sciences, and humanities.

So go ahead. Ban me from the next Olympics. Yank my endorsement deals. Stick your collective noses in the air and get all indignant on me. While you’re at it, keep arresting cancer and AIDS patients who dare to smoke the stuff because it deadens their pain, or enables them to eat. Keep sending in goon squads to kick down doors and shoot little old ladies, maim innocent toddlers, handcuff elderly post-polio patients to their beds at gunpoint, and slaughter the family pet.

Tell you what. I’ll make you a deal. I’ll apologize for smoking pot when every politician who ever did drugs and then voted to uphold or strengthen the drug laws marches his ass off to the nearest federal prison to serve out the sentence he wants to impose on everyone else for committing the same crimes he committed. I’ll apologize when the sons, daughters, and nephews of powerful politicians who get caught possessing or dealing drugs in the frat house or prep school get the same treatment as the no-name, probably black kid caught on the corner or the front stoop doing the same thing.

Until then, I for one will have none of it. I smoked pot. I liked it. I’ll probably do it again. I refuse to apologize for it, because by apologizing I help perpetuate this stupid lie, this idea that what someone puts into his own body on his own time is any of the government’s damned business. Or any of yours. I’m not going to bend over and allow myself to be propaganda for this wasteful, ridiculous, immoral war.

Go ahead and tear me down if you like. But let’s see you rationalize in your next lame ONDCP commercial how the greatest motherfucking swimmer the world has ever seen . . . is also a proud pot smoker. 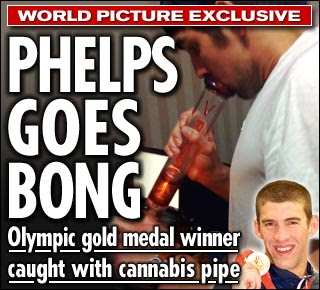