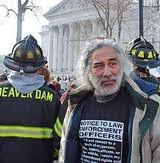 Ben Masel, prominent marijuana activist and professional rabble rouser, died Saturday from complications due to lung cancer. He was 56.

Diagnosed in January, Masel had recently made it through 25 radiation treatments for the disease, but was too weak to face chemotherapy. He died just before 9 a.m., surrounded by family at a nearby hospice center.

"He made a point of living at the front lines and fighting for his rights," said Semilla Anderson, Masel's daughter. "He will be remembered for that."

Masel was born in the Bronx and grew up in New Jersey. He moved to Madison in 1971 and quickly became a fixture of the counter-culture, known specifically for acts of civil disobedience in the cause of legalizing pot.

For the past 10 years he served as the vice president of the state chapter of the National Organization for the Reform of Marijuana Laws. Masel was the state director for six years in the late 1980s and early 1990s.

And in truth, when news broke last month that Masel had lung cancer, there were many who thought it made sense. After all, he spent a lifetime smoking cigarettes and was, by his own admission, a "heavy" marijuana smoker.

But friends and family hope that people will remember that Masel stood for a lot more than just one controversial cause.

In fact, Masel made his living fighting those who tried to limit personal freedoms and rights. He was, for lack of a better term, a professional activist.

Jeff Scott Olson, Masel's attorney for the past 20 years, said his client focused mainly on challenging limitations to free speech and right to assemble. Whenever police departments or cities tried to stop him from collecting signatures or protesting, he would sue. And according to Olson, he almost always won.

Said Amy Gros-Louis, a friend of 25 years, "Ben knew the laws better than the police did."

Masel often joked that his method of making a living offered a "great hourly rate if you can wait forever to get paid." Masel joked a lot; it's one of the things people say about him most.

He was a perennial candidate for elected office. He ran for Dane County Sheriff once; governor and senator too.

And he was a protester to the end. Even in his weakened state, Masel managed to show up at the Capitol during the month-long protest in March.

But behind all of that was a funny and decent man. He may have looked like a graying lion, but friends said he was a gentleman. "He was always courteous and reasonable," Olson said. "And that was because he was always ready to give someone the chance to change his mind."

Said Serio, "He was a special person. He will be missed."

I was privilaged to have known him via attending NORML conferences since the late 1980s.

I was always amazed at the propensity of people as intelligent as Ben, taking up the Tobacco-cigarette habit, despite all that has been known and revealed about the dangers.
Posted by Douglas Andrew Willinger at 11:51 PM