The Drugging of Children

At Home, and More Particularly at the Soda Fountain

An abstract of address delivered by Dr. Harvey W. Wiley before the National Education Association in Chicago

IT is a lamentable fact that in many of our some cities attempts have been made to city schools, children are at a disadvant- remedy some of these deficiencies, espeage by reason of improper clothing and daily those relating to poor luncheons, the necessity of doing without nourishing In the city of Washington, the school food, especially at the luncheon hour. In authorities established a number of tables And Coca Cola and other caffeinated drinks are open to the same objection where simple but nutritious lunch could be bought for a penny by some of those who were unable to bring proper food from home. Where this experiment has been tried it has been the universal consensus of opinion that the scholarship and deportment of those who received these simple benefactions have been improved. To show the hold that mercenary interests have on the country I may say that, when these attempts were made in Washington to supply wholesome and nutritious luncheons to the poor children, protests were made by dealers in candies, etc., in the vicinity of the school, against the practice, on the ground that serving the luncheon in the school room prevented the children from coming into their stores and buying their goods. Happily this commercial objection did not succeed in breaking down the plan adopted by the school authorities in Washington.

A still more important problem is that condition of school children which, for lack of a better term, is called nervousness. What is it that has ruined the children's nerves? In my opinion it does not as a rule come from over-study though occasionally that might have been the case. The trouble with the children of this country is that after the manner of their parents they are subjected to exhilaration by stimulants of various kinds, which have no food value and can work only injury. I refer especially to coffee and tea at home, the acquisition by the young boys of the tobacco habit, and the indulgence by the boys and girls in the so-called soft drinks which contain cocain or caffein. Fortunately the effectiveness of the campaign against cocain has driven most of the beverages containing it from the soda fountains, but this is not true of those containing caffein.

Coffee is too powerful a stimulant for children

The Drug Division of the Department of Agriculture secured the names of over one hundred so-called soft drinks sold at soda fountains which contained either caffein or cocain or both. As a rule no soda fountain sells over two or three of these soft drinks, but they are offered in the large numbers which I have mentioned in the various parts of the country. Inasmuch as every authority has agreed that cocain is a substance to be kept out of foods, I shall confine my remarks solely to those products containing caffein.

The health officers of Washington issued a letter of caution to parents in which it was urged that they should not allow their children to use tea or coffee at home. Nothing was said in this circular, however, about patronizing soda fountains where beverages containing caffein were sold. In point of fact, it is commonly admitted by experts that caffein-bearing beverages taken upon an empty stomach are more injurious than the same amount of caffein would be, consumed with meals. Now the consumption of tea and coffee at home with meals is less harmful than the drinking of caffeinated beverages at the soda fountains. The name of one of these beverages most frequently found is Coca Cola. Indeed, it is somewhat rare at the present time to find a soda fountain that does not sell this beverage. A glass of Coca Cola contains about the same amount of caffein as a cup of tea or coffee, and children in drinking this are doing the very thing their parents would not have them do if they knew it. The authorities should be as careful to caution against the use of Coca Cola as against coffee and tea. It is bad enough for grown people to drink these beverages without offering them to children.

But there is another reason why the children suffer with that indescribable condition called nervousness. While we may not inherit infectious diseases and nervousness itself, we may come into the world with an inheritance which is favorable to the breaking down of the nervous system. Why, may I ask, is this the case? The answer is obvious: We are the most bedrugged nation of the earth. Men and women are victims of morphin, codein, heroin, cocain, chloroform, and cannabis indica. They are saturated with tobacco and alcohol, and this added to the everlasting drugging is entirely sufficient to account for the destruction of our nerves. They cannot resist the bombardment.

How often do I hear the phrase, "I can drink a strong cup of coffee with no ill effect." The same excuse is urged for the use of alcoholic beverages. "I drink a glass of beer, or wine, or whisky, without feeling any ill effect," says the one who is addicted to the drug habit; "I never become intoxicated." But it is not the fourth or fifth drink of whisky which intoxicates; it is the sum of the first, second and third drinks. If there is no foundation there is no structure. Because the injury is not measured by any ordinary rule of dimensions, is no proof that it does not exist. The result is that not only are our children subject to all kinds of nervous defects but the grown people are more so.

It is often said that these stimulants are useful for mental effect. Learned men have written treatises at the instigation of the Coca Cola Company to show that caffein is positively beneficial. A story ran through one of the magazines showing that the brilliant playwright could not produce a striking success except under the influenceof alcohol. All such stuff as this is merely illusionary. Neither coffee, nor tea, nor tobacco, nor alcohol, nor opium, nor cocain, nor hasheesh, ever produced a brilliant thought. They sometimes cut loose the sense of responsibility and make one feel as if he were a genius; but they do nothing but harm. The inhabitants of the Grecian peninsula owed nothing of their genius to any of the dopes mentioned. The world would be better today if coffee, tea, tobacco, alcohol, morphine, opium and its derivatives, cannabis, acetanilid, and all their progeny, relations, and assymptotes were blotted from the face of the earth.

But it is not for me to describe what men and women of mature age shall eat, drink and smoke. My duty is to save, if possible, the children. If we can save the children, all right. We need not have much fear for the men and women that come after; they will be strong, self-reliant, and capable of taking care of themselves. My plea, therefore, to the teachers of the nation is to join in the great work to banish from the menu of the child every single substance which hits the nerves, excites undue activity, or produces unnatural stimulation, and to substitute in its place a wholesome, nutritious, plain, simple diet, which may enable the child to grow and become a healthy and valuable citizen. 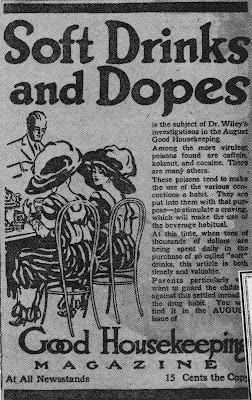