There Cigarettes are made with are the finest green leaves, and will thus be found to produce, in a convenient and agreeable form, the full anicsthctic effects of the drug.

Ci'ea Cigarettes will, by the sedative action of the fumes upoa the pharynx, larynx, and air-passages, relieve coughing, irritation of Be throat, and difficulty of breathing.

For the relief of Asthma, Hay-fkver, Chronic Cnocn, Drsram, and Irhit-atiox Of The Throat, these Cigarettes will prove Terr invaluable.

Cuca Cigarettes are put up in boxes at 3s. each.

For the Relief of Asthma, Hay Fever, Chronic Cough, Etc.

The beneficial effects reported from the use of coca leaves in the form of cheroots and cigarettes for the relief of asthmatic difficulties, irritative cough, etc., have induced us to prepare and offer them to the profession. They are made of coca leaves mixed with an equal portion of mild tobacco. The flavor and aroma are described by those who have used them as very agreeable. They produce a sedative effect on the pharynx, larynx, and air passages, which results frequently in the relief of irritative cough and difficult breathing. Impending attacks of asthmatic dyspnoea are said to be frequently warded off by their use, and chronic sufferers have been able thus to secure comfort. The effect seems to be due to an anaesthetic action of the smoke upon the mucous membrane with which it comes in contact. The peripheral irritation, which results in the spasms either of dyspnoea or of cough, is thus removed, and with removal of the cause the effect disappears. Prices and literature furnished on application. 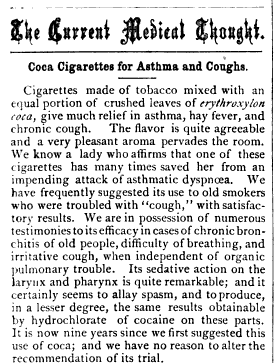 Coca Cigarettes for Asthma and Coughs.

Cigarettes made of tobacco mixed with an equal portion of crushed leaves of erythroxylon coca, give much relief in asthma, hay fever, and chronic cough. The flavor is quite agreeable and a very pleasant aroma pervades the room. We know a lady who affirms that one of these cigarettes has many times saved her from an impending attack of asthmatic dyspnoea. We have frequently suggested its use to old smokers who were troubled with "cough," with satisfactory results. We are in possession of numerous testimonies to its efficacy in cases of chronic bronchitis of old people, difficulty of breathing, and irritative cough, when independent of organic pulmonary trouble. Its sedative action on the larynx and pharynx is quite remarkable; and it certainly seems to allay spasm, and to produce, in a lesser degree, the same results obtainable by hydrochlorate of cocaine on these parts. It is now nine years since we first suggested this use of coca; and we have no reason to alter the recommendation of its trial. 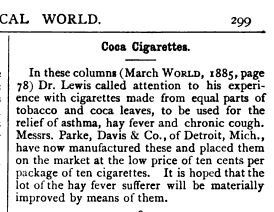 In these columns (March World, 1885, page 78) Dr. Lewis called attention to his experience with cigarettes made from equal parts of tobacco and coca leaves, to be used for the relief of asthma, hay fever and chronic cough. Messrs. Parke, Davis & Co., of Detroit, Mich., have now manufactured these and placed them on the market at the low price of ten cents per package of ten cigarettes. It is hoped that the lot of the hay fever sufferer will be materially improved by means of them.

—Coca-leaf cigarettes are rapidly coming into use. Coca when smoked, seems to produce the same effect on the system as coca taken internally, in the form of fluid extract, wine or elixir, but as would be expected, not in such a marked degree. Coca cigarettes are an excellent substitute for tobacco, but it is very doubtful whether they are less injurious than tobacco. 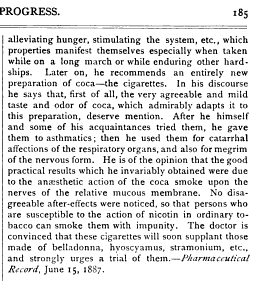 Coca Cigarettes.—Dr. Nachtigall confers on the excellent properties of coca, especially of the wine, inalleviating hunger, stimulating the system, etc., which properties manifest themselves especially when taken while on a long march or while enduring other hardships. Later on, he recommends an entirely new preparation of coca—the cigarettes. In his discourse he says that, first of all, the very agreeable and mild taste and odor of coca, which admirably adapts it to this preparation, deserve mention. After he himself and some of his acquaintances tried them, he gave them to asthmatics; then he used them for catarrhal affections of the respiratory organs, and also for megrim of the nervous form. He is of the opinion that the good practical results which he invariably obtained were due to the anaesthetic action of the coca smoke upon the nerves of the relative mucous membrane. No disagreeable after-effects were noticed, so that persons who are susceptible to the action of nicotin in ordinary tobacco can smoke them with impunity. The doctor is convinced that these cigarettes will soon supplant those made of belladonna, hyoscyamus, stramonium, etc., and strongly urges a trial of them.—Pharmaceutical Record, June 15, 1887. 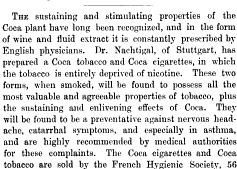 The sustaining and stimulating properties of the Coca plant have long been recognized, and in the form of wine and fluid extract it is constantly prescribed by English physicians. Dr. Nachtigal, of Stuttgart, has prepared a Coca tobacco and Coca cigarettes, in which the tobacco is entirely deprived of nicotine. These two forms, when smoked, will be found to possess all the most valuable and agreeable properties of tobacco, plus the sustaining and enlivening effects of Coca. They will be found to be a preventative against nervous headache, catarrhal symptoms, and especially in asthma, and are highly recommended by medical authorities for these complaints. The Coca cigarettes and Coca tobacco are sold by the French Hygienic Society, 56 Conduit Street, Regent Street, W. 1888 Illustrated Naval and Military Magazine

the leaves of the coca-plant make the best cigarettes for asthma (Nachtigal).

A convenient chart is given below to locate the reasons of dyapnoea.