The dangers of alcoholism would be avoided if no other stimulant was taken...than...Vin Mariani 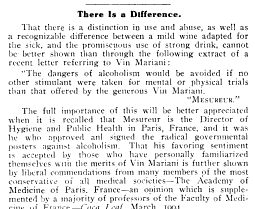 Cocaine, taken orally and dilutely in Coca beverages, as caffeine is taken by drinkers of Coffee and Tea, is not only absorbed slowly, avoiding the addictive spike of concentrated dosing, numbs the stomach, inhibiting the appetite for more.

There Is a Difference.


That there is a distinction in use and abuse, as well as a recognizable difference between a mild wine adapted for the sick, and the promiscuous use of strong drink, cannot be- better shown than through the following extract of a recent letter referring to Vin Mariani:


"The dangers of alcoholism would be avoided if no other stimulant were taken for mental or physical trials than that offered by the generous Vin Mariani.

The full importance of this will be better appreciated when it is recalled that [Gustave] Mesureur is the Director of Hygiene and Public Health in Paris, France, and it was he who approved anl signed the radical governmental posters against alcoholism. That his favoring sentiment is accepted by those who have personally familiarized themselves with the merits of Vin Mariani is further shown by liberal commendations from many members of the most conservative of all medical societies—The Academy of Medicine o£ Paris. France—an opinion which is supplemented by a majority of professors of the Faculty of Medicine of France.—Coca Leaf, March, 1904. 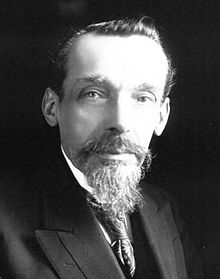 Posted by Douglas Andrew Willinger at 10:14 AM