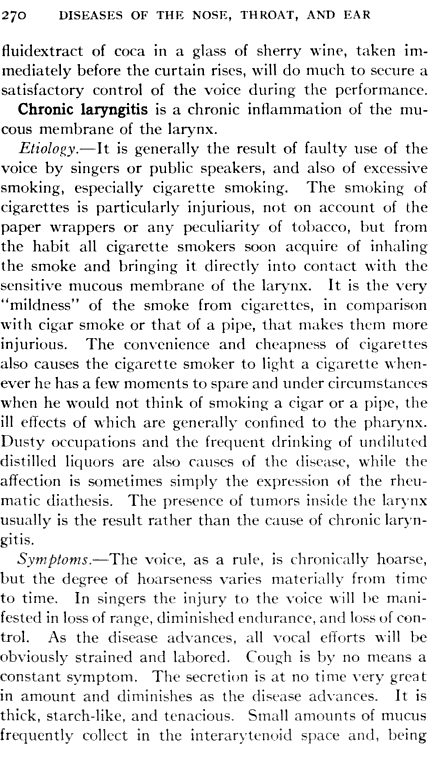 the fluidextract of coca in a glass of sherry wine, taken immediately before the curtain rises, will do much to secure a satisfactory control of the voice during the performance.

Chronic laryngitis is a chronic inflammation of the mucous membrane of the larynx.

Etiology.—It is generally the result of faulty use of the voice by singers or public speakers, and also of excessive smoking, especially cigarette smoking. The smoking of cigarettes is particularly injurious, not on account of the paper wrappers or any peculiarity of tobacco, but from the habit all cigarette smokers soon acquire of inhaling the smoke and bringing it directly into contact with the sensitive mucous membrane of the larynx. It is the very "mildness" of the smoke from cigarettes, in comparison with cigar smoke or that of a pipe, that makes them more injurious. The convenience and cheapness of cigarettes also causes the cigarette smoker to light a cigarette whenever he has a few moments to spare and under circumstances when he would not think of smoking a cigar or a pipe, the ill effects of which are generally confined to the pharynx. Dusty occupations and the frequent drinking of undiluted distilled liquors are also causes of the disease, while the affection is sometimes simply the expression of the rheumatic diathesis. The presence of tumors inside the larynx usually is the result rather than the cause of chronic laryngitis.

Symptoms.—The voice, as a rule, is chronically hoarse, but the degree of hoarseness varies materially from time to time. In singers the injury to the voice will be manifested in loss of range, diminished endurance, and loss of control. As the disease advances, all vocal efforts will be obviously strained and labored. Cough is by no means a constant symptom. The secretion is at no time very great in amount and diminishes as the disease advances. It is thick, starch-like, and tenacious. Small amounts of mucus frequently collect in the interarytenoid space and, being suddenly detached by coughing, are thrown out through the mouth to a considerable distance, while little bridges of mucus are sometimes seen with the laryngoscope extending from cord to cord. There is a constant feeling of constriction, as of a foreign body in the air-passages. Upon inspection certain portions of the mucous membrane of the larynx appear redder than normal; and sometimes the entire mucous membrane of the larynx is of a uniform red color, with the exception of the cords, which may be somewhat lighter in color than the surrounding parts. The mobility of the cords is frequently impaired, either from swelling of the mucous membrane covering the arytenoids or from slight muscular pain. Erosion of the interarytenoid space is frequently seen.
Posted by Douglas Andrew Willinger at 1:14 PM