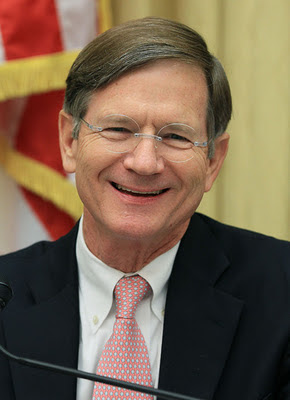 I believe this law could also be applied to any person seeking Medical (Pharmacue­tical) Treatments outside this country that are unavailabl­e here. Seems like a Big Pharma / AMA Monopoly Grant. We can't allow a person to buy his prescripti­on outside this country when they're able to buy it here "Sanctione­d" at ten times the price. For the same drug, produced on the same assembly line, in the same strength and packaging, We and our Insurance Industry gets to buy it at the American Premium. Who Controls the House writing this bill? It sure isn't the voters or even a minority of them.

Indeed, "...to engage in conduct ..." Lamar Smith would extend the U.S. criminal racketeering regarding suppression of freedom of medicine and diet, internationally, by criminalizing "conspiracy" to engage in conduct that would be "illegal" within the U.S., even if legal where it would take place, such as receiving an IBOGAINE treatment in Mexico.

IN THE HOUSE OF REPRESENTATIVES

Mr. SMITH of Texas (for himself and Mr. SCHIFF) introduced the following bill; which was referred to the Committee on the Judiciary, and in addition to the Committee on Energy and Commerce, for a period to be subsequently determined by the Speaker, in each case for consideration of such provisions as fall within the jurisdiction of the committee concerned

Be it enacted by the Senate and House of Representatives of the United States of America in Congress assembled,

This Act may be cited as the ‘Drug Trafficking Safe Harbor Elimination Act of 2011’.

(2) inserting at the end the following:


This legislative crime was approved by a Judiciary Committee Chairman vote of 20 to 7. Accordingly:


So who voted for this sweeping new assertion of power to regulate the personal behavior of Americans? All fifteen Republicans on the Judiciary Committee present voted for the bill, including such supposed champions of individual liberty as Ted Poe and Mike Pence. Back on March 10, 2010, for example, Poe was ranting that the “American people don’t desire more oppressive, intrusive government” and they want “to control their own lives.” And back on July 2, 2010 Pence was effusing that Americans, “live and breathe the cause of liberty. Freedom is the very core of an American spirit that is alive and well today.” But that was then and this is now.

The other seven Republicans on the committee didn’t bother to show up for the vote, including none other than Louis Gohmert. Perhaps he was off on crusade in the Middle East. All but two of the sixteen Democrats on the committee managed to put in an appearance, with five of them actually voting FOR passage. A minority of Democrats can often be found to support any bad idea embraced by all Republicans.

IMHO an overlooked matter explaining the political dynamics, asides from the openly listed political donations from pharma interests, are these elected officials' fraternal order memberships- as they are clearly beholden to something other than popular opinion, and need.

For this action certainly goes beyond the stated impetus of a case (where the U.S. government prosecution lost a potential conviction of cocaine smugglers from South America to Canada where the cocaine never entered the U.S. - with cocaine being illegal in Canada), simply by limiting the statute change to activities illegal where committed.

It is not about stopping persons within the U.S. smuggling certain drugs into places where already illegal, rather it is about extending and expanding the U.S. backed Pharmacratic Inquisition worldwide.

"... as Bill Piper of the Drug Policy Alliance noted, the bill is written so broadly that it could criminalize any violation of US drug laws if that violation is planned in the US. For instance, heroin maintenance therapy is illegal under US drug laws. As the law is written, a US health care professional who made plans to work with colleagues doing heroin maintenance in a country where it is legal could potentially face prosecution".

Or an Ibogaine treatment.

Or drinking Coca in Bolivia.