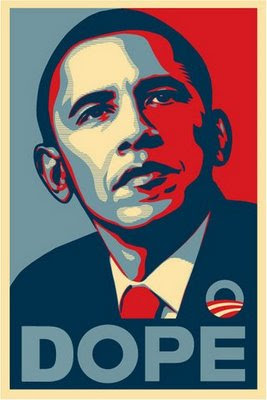 In the book bearing his name "Dreams From My Father: A Story of Race and Inheritance," by mentioning the terms "junkie" and "pothead" in the same breath- Obama hints that he views them as the same or similarly.

"I had learned not to care," he wrote. "I blew a few smoke rings, remembering those years. Pot had helped, and booze; maybe a little blow when you could afford it. Not smack, though. ..."

"Blow" is a street name for cocaine. "Smack" is slang for heroin.

"Junkie. Pothead. That's where I'd been headed: the final, fatal role of the young would-be black man," Obama wrote. "Except the highs hadn't been about that, me trying to prove what a down brother I was. Not by then, anyway. I got high for just the opposite effect, something that could push questions of who I was out of my mind, something that could flatten out the landscape of my heart, blur the edges of my memory. I had discovered that it didn't make any difference whether you smoked reefer in the white classmate's sparkling new van, or in the dorm room of some brother you'd met down at the gym, or on the beach with a couple of Hawaiian kids who had dropped out of school and now spent most of their time looking for an excuse to brawl. ... You might just be bored, or alone. Everybody was welcome into the club of disaffection."

No shit that he "learned not to care". He not only speaks about heroin and Cannabis as if they were the same, he does so when stating that he did not use heroin, only cocaine on occasion, and Cannabis more frequently. How is using MJ and occasionally cocaine mean that one is destined to become a "junkie" - a term referring to heroin - unless one has "learned not to care" about truth?!

By so conflating and confusing the different drugs, "Obama" demonstrates what he here admits, that he learned "not to care".

It should be a textbook example of carefully chosen words- to suggest one thing, while really meaning something else - such as "change", suggesting that for something better, but in reality making no promise of something necessarily better.
Posted by Douglas Andrew Willinger at 4:20 PM