198X - 1992 The Drug Policy Foundation's Steps in the Right Direction 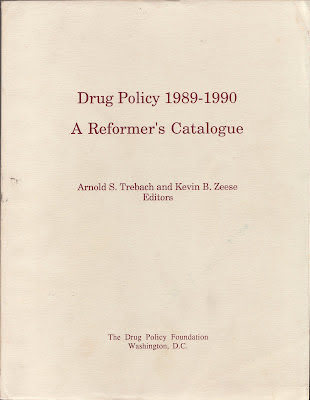 The Drug Policy Foundation would start a number of educational efforts, including a TV show America’s Drug Forum, hosted by then D.P.F. President Arnold Trebach, and so described in a 1990 conference pamphlet:

The Drug Policy Foundation’s educational efforts would say little if not practically nothing about the Coca issue, despite its public education mission, and despite the hysteria about cocaine that was used to spur the drug war’s 1986-88 escalation.

With the book The Great Drug War, this was at least explainable in that its author, Dr. Trebach wrote it before the 1986 outbreak of media sensationalism generating support for harsher drug laws, and apparently did not see the potential for such sensationalism for cocaine despite the past parallels with other such drugs – such as opiates, cannabis and L.S.D. – to generate support for harsher laws. This is even as Dr. Trebach was involved with discussions about cocaine, marked by a December 1985 article in Harpers Magazine “In The Age Of Cocaine: What is Our Drug Problem”, which includes an reference to a then upcoming book by Trebach “The War on Us: The Story of the American Anti-Drug Crusade and Its Victims”, which will be published next year by Macmillan”. While Trebach never released a book by that title, his book The Great Drug War was released sometime in 1986. To their credit, the D.P.F. television series America’s Drug Forum included an episode interview with Dr. Andrew Weil, who would speak about Coca and cocaine as an example of the dangers of the prohibition laws. Yet the lack of much anything else about Coca by the Drug Policy Foundation would indicate provided a decision was made to focus their energies elsewhere, primarily the medicinal use of marijuana, and the availability of clean needles for those taking inject able drugs.

Also to its credit, the D.P.F. would continue for a time its educational efforts, including those serving as venues for independent scholars to make paper presentations through panels, and for immortalizing such papers through their conference paper compendiums that would start with the 1989 conference, continuing through 1990, 1991 and 1992: a good time for independent drug writers, with each conference from 1989 through 1992 with a compendium of conference papers, each roughly 300 pages with 50 articles complied by D.P.F. employee Carolyn Schulman, with each including a coca related article:

November 1990; “The Great Issues of Drug Policy”
“The Ever-Changing, Ever-Confused Popular Conception of Cocaine”, by Douglas A. Willinger

November 1992; “Strategies for Change”,
“Cocaine Conversion: Onwards to Coca” by Douglas A. Willinger

From 1989 through 1992, each conference including a cocaine panel providing a modest platform for Coca issue with one or two speakers specializing in some aspects of Coca sharing a 90 minute session shared with two or three speakers focused upon refined cocaine. Anthony Henman, author of the 1978 book MamaCoca appeared on the cocaine panel at the 1989 conference. My self, Douglas Willinger appeared upon the cocaine panels at the 1991 and 1992 conferences, plus an extra panel in 1992.

This gave me the platform to highlight the market conflict between Tobacco and Coca and the occurrence of the push to ban Coca against the backdrop of the construction of the Panama Canal, which was completed and opened in 1914, the year Coca would be effectively prohibited by the U.S. Harrison Narcotics Act.