The Introduction of Isolated Cocaine and a New Confusion:
the Sloppy Writings of Sigmund Freud

Coca itself had a good reputation amongst those familiar with it, with this at worse being that it was not very effective, usually owing to stale leaves.

However, Coca would get a bad reputation by those reacting to the dangerous of isolated concentrated cocaine, expressed as a generalized sentiment against cocaine that failed to acknowledge the importance of the dose concentration, and hence condemning Coca.

This occurred shortly after the concentrated drug’s commercial pharmaceutical introduction in 1884 by Merck in Germany, and Parke Davies in the United States of America, the latter which introduced simultaneously an expanded availability of products containing the entire continuum from Coca beverages to inject able cocaine, that would be enthusiastic advocated by those using the terms Coca and cocaine interchangeably.

In 1885 they published a brochure offering up a summary of Coca's therapeutic uses as well as their Coca derivative product line: Coca Erythroxylon and its Derivatives: A Resume of their History; Botanical Origin; Production and Cultivation; Physiological Action; and Medicinal Preparations Embracing reports on their employment in General and Minor Surgery; Ophthalmology; Otology; Laryngology; Gynecology; Genito-Urinary, Nasal and Dental Surgery; in the Treatment of the Alcohol and Opium Habits; in General Medicine; etc. etc. It said:

Parke Davies would quote a particular Austro-Moravian Jewish physician, born in the then largely German speaking Sudeten-Moravian town of Freiberg, Austria-Hungary/Pribor, Czechoslovakia), and living in Vienna, in a series of published medical journal articles that used the terms “Coca” and cocaine loosely: Sigmund Freud. (born May 6, 1856-died September 23,1939). 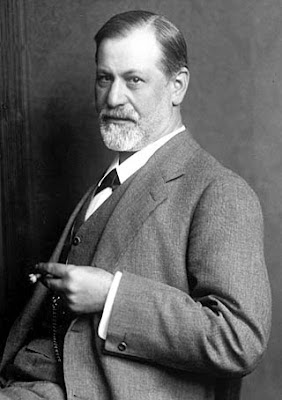 His July 1884 article “On Coca” claimed he had used it to cure morphine addiction, with the cocaine use suspended after 10 successive days.

His second article, published in 1885, repeated the first paper’s claim while adding that no cocaine habitation had set in.

His third article, published in 1887, “Craving and Fear of Cocaine” responds to criticism by Albrecht Erlenmeyer (1849-1926) , who later accused Freud of unleashing the “third scourge of mankind” after alcohol and Opium, attacking Erlenmeyer for using injections instead of oral doses. This was despite Freud’s own advocacy of cocaine injections, in doses 1/10th that of an oral dose, following his 1884 paper’s advocacy of oral cocaine. Freud’s loose use of the words coca and cocaine, using them interchangeable, would only further confuse the issue.

Among these were the German toxicologist Lewis Lewin, Albrecht Erlennmeyer, and Emil Kraepelin, the German psychiatrist, author of an early classification of mental disorders.

In 1891, in his work's forth edition, the latter added "cocainism" into a short list of "chronic intoxications" in which he defines as including the chewing of coca leaves, having consequences "in the homeland of coca, in Peru that are as well known as those of opium smokers in China.
Enhancing the likelihood of this confusion were loose use of the terms "Coca" and "cocaine," and the juxtaposition of the market where Coca products and isolated cocaine were presented together with little mentioning of their differences, and where in some areas, the two were introduced simultaneously. Occurring along with the more widespread marketing of the Coca products -- sometimes introduced simultaneously -- and along with such relatively new "more efficient" modes of administration as the hypodermic needle, the introduction of the infinitely more dangerous concentrated drug inevitably spawned much confusion about Coca for those having not known it- especially with the juxta-positioning the products and the loose use of the terms "Coca" and "cocaine."

A good example of this was the well intended, but flawed marketing practices of the U.S. pharmaceutical concern, Parke-Davis. This was only made more likely by their simultaneous marketing and the loose use of terms, most notably by Sigmund Freud, whose writings reflected a confusion of Coca and cocaine as synonymous. 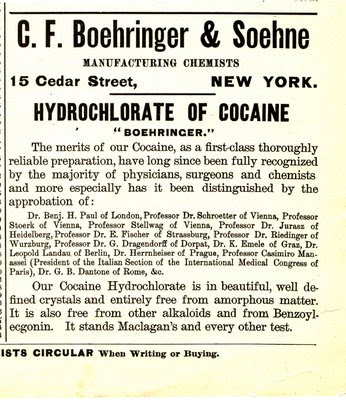 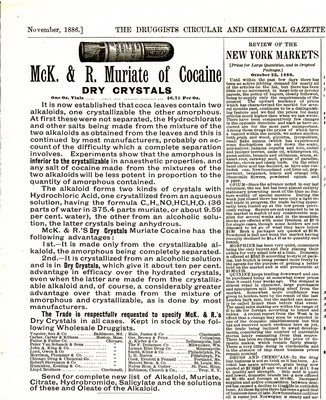