The U.S.D.A. campaign against coca: prosecutions and lobbying

Under the 1906 act, Coca products were perfectly legal if properly labeled.

The USDA would exploit its new power to declare substances, dangerous, habit-forming or deleterious, with prosecutions against the manufacturers of coca products sold as "foods", such as beverages, for “adulteration”.

This was a separate charge then that of “mislabeling”.  The following prosecutions against a list of Coca or dilute cocaine beverage manufacturs each included charges for both 'adulteration' for containing cocaine which the USDA was declaring dangerous, and 'mislabeling' for actually failing to comply with the 1906 Act's labeling requirement for the presence and proportion of cocaine alkaloid.

With Wiley and Kebler so declaring cocaine as  "such an insidious, habit-forming drug [that] certainly has no place whatsoever in these products", while prosecuting Coca-Cola for containing added caffeine, which is NOT included in the 1906 Act's list of substances required to be labled, for "adulteration" with a like claim of dangerousnous against isolated caffeine, they were creating a business climate to discourage such products no matter how well labeled.

Soon after its 1906 empowerment, the U.S.D.A. began a series of prosecutions alleging section 7 violations for "adulteration" in cases also involving a charge of "misbranding" 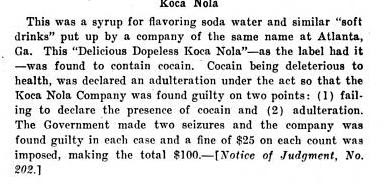 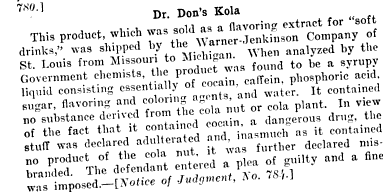 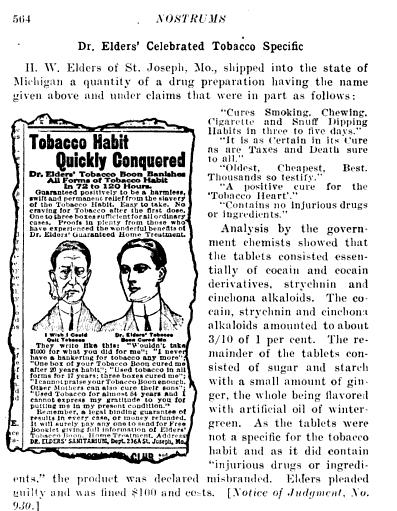 
Analysis by the government chemists showed that the tablets consisted essentially of cocain and cocain derivatives, strychnin and cinchona alkaloids. The co cain, strychnin and cinchona alkaloids amounted to about 3/10 of 1 per cent. The remainder of the tablets consisted of sugar and starch with a small amount of gin ger, the whole being flavored with artificial oil of wintergreen. As the tablets were not a specific for the tobacco habit and as it did contain "injurious drugs or ingredients." the product was declared misbranded. Elders pleaded euilty and was fined .*100 and costs. [Notice of Judgment, No. 930.]

Kos-Kola, a soft-drink manufactured by the Sethness Company of Chicago, Illinois was "adulterated in that it contained an added poisonous and deleterious ingredient, to wit, cocaine." (Guilty plea, January 10, 1910);

Kola-Ade, a soft-drink manufactured by the Kola-Ade Company of Atlanta, Georgia was "adulterated in that it contained an added deleterious ingredient, namely cocaine and coca leaf alkaloids" (Guilty plea, March 19, 1910);

Celery Cola, a soft-drink manufactured by the Birmingham Celery Cola Company of Birmingham, Alabama was "adulterated, in that it contained added poisonous and deleterious ingredients which might render the article injurious to health, namely caffein, cocain, and cocain derivatives;" (Guilty verdict, March 11, 1910);

Rococola, a soft-drink manufactured by the Lehman-Rosenfeld Company of Cincinnati, Ohio was "adulterated within the meaning of the act in that it contained, in addition to the ingredients mentioned on the label, certain added deleterious ingredients, to wit caffeine and cocaine, which added ingredients rendered said article of food injurious to health;" (Guilty plea, May, 16, 1910);

Cola Syrup, a syrup produced by the Mound City Extract Company of St. Louis, Missouri was "adulterated in that the product contained in said barrel was a liquid consisting essentially of sugar, caffeine, cocaine and derivatives of cocaine... and that said product contained added poisonous and deleterious ingredients which might render such articles injurious to health, to wit, caffein, cocaine and derivatives of cocaine" (Guilty plea, November 11, 1910);

Great American Coca Cream, a soft-drink made by the American Beverage Company of St. Louis, Missouri was "[adulterated]..in that the contents of said bottles contained added poisonous and deleterious ingredients, to wit, cocaine and caffeine, which rendered said articles injurious to health;" (Guilty plea, November 10, 1910);

"Kola" Syrup, a syrup labeled "Dr. Don's Kola" produced by the Warner-Jenkinson Company of St. Louis, Missouri was "[adulterated because]...said article contained added poisonous and deleterious ingredients, to wit, caffein and cocaine derivatives, which rendered it injurious to health" (Guilty plea, no date given other then February 21, 1911 publication date);

"Red Seal" Cola Queen Syrup, a syrup also produced by the Warner-Jenkinson Company was "adulterated..in that the product contained added poisonous and deleterious ingredients, to wit, caffein and cocaine and derivatives of cocaine, which might render said article injurious to health" (Guilty plea, no date given other then February 21, 1911 publication date);

Vani-Kola Compound Syrup, a syrup produced by The Vani-Kola Company of Canton, Ohio was "adulterated in that it contained added deleterious ingredients, viz, caffeine and cocaine [and other coca leaf alkaloids." (Plea of nolo contendere, February 14, 1911

Soda Water Syrup Cola, a soft-drink syrup made by W.H. Hutchinson & Son located in northern Illinois was "adulteration was alleged because the article of food in said bottle contained an added deleterious ingredient, to wit, cocaine, rendering such article injurious to health" Plea of nolo contendere entered on February 23, 1911; at trial, "defendant admitted the charges in the information, and further admitted for the purpose of the case that cocaine was an added ingredient of the product, and also that it was a deleterious, but introduced proof to the effect that the cocaine in said product was mixed therein by accident." Jury verdict of not guilty.

The Pure Food and Drug Act of 1906 did not prohibit cocaine.  It only required its labeling in products where it was an ingredient, whether directly with isolated cocaine, or indirectly with Coca.  This was even things that clearly enumerated they were Coca preparations and thus likely to contain cocaine, i.e. "Coke" Extract, manufactured by A.L. Pilsbury of New Orleans or "Coke Extract" manufactured by the Kumfort Company of Atlanta, Georgia, had to list cocaine and its proportion or quantity on the label.

Yet its open ended delegation of regualtory authority to the U.S.D.A. was used as a tool to implement its political-mercantilist agenda to end Coca's use in the U.S. as a beverage to be consumed like Coffee or a daily stimulant, like Coffee or Tobacco -- in other words as a food product , as evidenced by this Washington, D.C. food and drug policy thrust, cir 1907+ typified by this U.S.D.A.'s prosecutor's charge to the jury in a 1910 case against the Birmingham Celery Cola Company of Birmingham, Alabama:


As Celery Cola is intended for a beverage and not a drug, you have the right in determining this question to consider the injury from the probable and repeated use of the article as a beverage, rather than its rare and occasional use as a drug.

This would be sufficient to cow a good portion of the coca products market to eliminate the cocaine alkaloid from their product’s formulations – regardless of whether isolated or as a natural component of coca, if not eliminate the coca product altogether. This would spur Coca beverages’ retreat from food supermarkets, and to seek refuge in pharmacies. Coca product manufacturers took different responses. Some simply complied with the labeling requirements. Some simply removed the cocaine alkaloid, much as the makers of Coca-Cola did in 1903. In the period of time after this act took effect in 1907, numerous coca products were either de-cocainized or altogether eliminated, particularly those sold as food for regular use, but also against those sold as drugs for less frequent use, as the case with Vin Mariani. In 1907 Mariani & Company introduced a new version of Vin Mariani for US markets still made with Coca, but with the cocaine alkaloid removed. Starting in 1907, Vin Mariani for U.S. markets was of a revised formulation, without cocaine, with a then new label on the bottle’s rear side, stating:

THE STANDARD OF MARIANI PREPARATIONS, established by us in France nearly half a century ago, is based upon the adaptation of Coca as employed by the Andeans during hundreds of years as a force sustainer. WE HAVE ALWAYS emphasized our use of Coca leaves chosen for their AROMATIC and MEDICIAL qualities and, as we have never considered the negligible content of the alkaloid in such leaves essential to our formula, our processing completely eliminates it from this preparation. AMERICAN LABEL ADOPTED 1907


“… as we have never considered the negligible content of the alkaloid in such leaves essential to our formula, our processing completely eliminates it from this preparation.”