The U.S.A.'s Criminal Mercantilism Protecting The Domestic Agrilcultural Commodity of Tobacco From The Foreign Competitor Coca

While both Tobacco and Coca had long histories of human use, owing to botanical-weather requirements and volatility, Tobacco is a U.S. agriculture commodity – marked in granite along with cornstalks at the top of the columns of the U.S. Capitol – prominent in its southeast; Coca is the foreign crop, requiring tropical climates, preferably with high elevations absent with the southernmost regions of the U.S. William Martindate published on page 37 of his 1892 book Coca and Cocaine: [see: Journal of a Voyage on the Amazon and Rio Negro, Hooker's Journal Of Botany, vol. 1853, p. 212; Therapeutic Gazette, January 1886, p. 14 Pharmacy Journal 1886, p.705]

It is my opinion that the Coca plant is adapted for culture in many countries where it is now unknown. Among the countries where it would be well to experiment with it are Guatemala, Mexico, the East and West Indies, India, Southern China, potions of Africa, and possibly India. It is doubtful if it would grow in any portion of the United States. Requiring an average temperature of at least 70o, the only districts at all suited would be Florida and Southern Texas [this was written before the 1898 U.S. acquisition of the Kingdom of Hawaii]; and it is highly probable that proximity to the sea-coast at so low an altitude would prove fatal. Nor would irrigation prove adequate in those countries possessing a long dry season. The plants must not only have an abundant supply of water at the roots; they must be bathed in a humid atmosphere for the greater portion of the year. But from what I have read of some of the countries above named, I am confident that the plant would there find a congenial home. Jamaica offers especially hopeful conditions.

Growing it within the U.S. would generally require a greenhouse, something which the U.S.D.A. would acknowledge with its own study on the commercial potential of coca and other drug plants as domestic U.S. crops, which was the topic of a newspaper article in the January 10, 1904 issue of The Boston Sunday Globe ‘Uncle Sam’s poison Farm.’ ‘Government Conducts a Novel Industry on the Potomac Flats- plants which yield the most powerful and valuable drugs known to science- will start growing opium growing, too, in Texas’. This experiment would end at roughly the time that the U.S.D.A. adopted its stance against Coca in food and drug products. 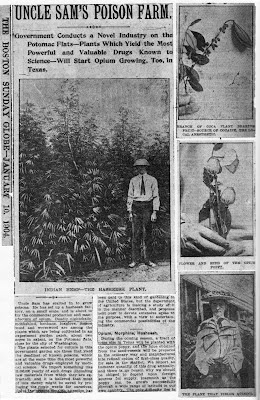 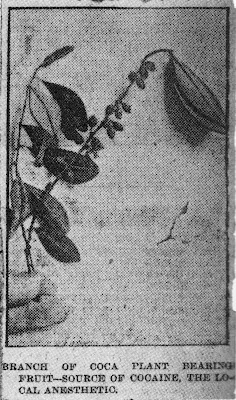 Posted by Douglas Andrew Willinger at 2:44 AM