Ron Paul Wimps Out on Freedom of Medicine and Diet

Forgoes the 1st and 9th Amendments

Would Allow Criminal Mercantilism Under Guise of 'States Rights'

Ron Paul would apparently allow States involved with such things as pushing Virgina Bright Leaf and stock trading in such, to ban the adult creation, sale, transport, possession and use of Marijuana, Coca, etc. 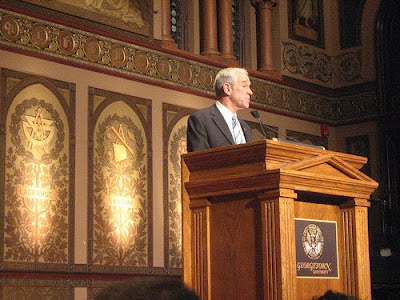 War on drugs is out of control; revert control to states

Q: In your 1988 campaign you said, "All drugs should be decriminalized. Drugs should be distributed by any adult to other adults. There should be no controls on production, supply or purchase for adults." Is that still your position?

A: Yeah. It's sor of like alcohol. Alcohol's a deadly drug, kills more people than anything else. And today the absurdity on this war on drugs has just been horrible. Now the federal government takes over and overrules states where state laws permit medicinal marijuana 1 for people dying of cancer. The federal government goes in and arrests these people, put them in prison with mandatory sentences. This war on drugs is totally out of control. If you want to regulate cigarettes and alcohol and drugs, it should be at the state level. That's where I stand on it. The federal government has no prerogatives on this.

Q: But you would decriminalize it?

A: I would, at the federal level. I don't have control over the states. And that's why the Constitution's there.

Posted by Douglas Andrew Willinger at 2:33 AM