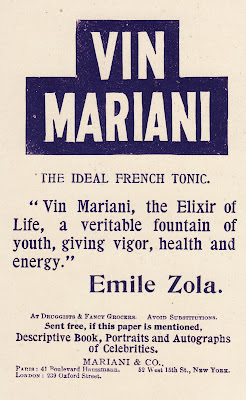 Vin Mariani's U.K. debut paralleled if not spurred growing interest in Coca there: In May 1870, Sir Dr. Robert Christison, who later became President of the British Medical Association, began personally exploring Coca's effects, after having observed its anti-fatigue actions upon two of his students.

Having been exhausted from a 16 mile walk exhausted, the pair if students were able to take "another walk of an hour's duration with ease and pleasure," via drinking two drachmas of a Coca infusion. Dr. Christison began his experimentations by measuring his endurance without Coca, by starting his day with a fifteen mile walk, "in stages, with intervals of half hour's rest, and without food or drink after 8:30 A.M."; he found this task, "excessively wearisome." Urinary solids, samples taken every two hours, increased during the late-morning, while diminishing during rest and after dinner. His pulse, normally 62 at rest, was 110 at the end of his walk, and 90 two hours afterwards. His wearisomeness extended to the subsequent evening when he was incapable of mental labor, and to the next morning when he would awake "wearied and lazy." A repeat of this regimen two days later led to the same results. Four days afterwards, Christison virtually repeated this regimen by increasing the distance of his walk to 16 miles, walking in stages of four and six miles, with rest stops of a half hour of and taking as before: the main modification to his regimen being the chewing of eighty grains (English equivalent) of Coca leaves during his second rest period, noticing subtle yet significant effect.

As recounted by Searle in 1881: He felt no effect from the Coca until he stepped out of doors, when, to his surprise, all weariness fled and he found he could walk with ease and elasticity. He accomplished the six miles without difficulty, and ran up two flights of stairs to his room, taking two steps at once... After his return and before dinner he felt neither hunger nor thirst, but ate well: in the evening was alert and not drowsy: slept well, and awoke in the morning refreshed and free from fatigue. More measurably, Christison's pulse was 90 and 62, while his urinary solids, previously affected by his degree of physical exertion without Coca, were stabile with Coca, regardless of how hard he physically exerted himself within the confines of these experiments. Christison further explored Coca's effects that following September 15, while climbing and descending a 3,224 foot mountain. He wrote "I was neither weary, nor hungry, nor weary, and felt as if I could easily walk home four miles." As later recounted: It required two and a half hours to reach the summit, and he was so much fatigued that it required much determination to get over the last three hundred feet. His companions ate lunch, but he chewed instead two thirds of a drachm (English equivalent?) of Coca. He experienced no fatigue while going down, and after returning home felt no hunger, nor thirst, nor weariness. At six P.M. he took dinner, and felt lively and well during the evening. He had taken no food nor drink from eight A.M. till six P.M. , and had chewed in all eighty grains of Coca. Eight days afterward he repeated the same experiment with even more comparable results. His son also obtained quite equal effects.

Christison's conclusions, published in 1876 was that Coca prevented and removed fatigue; that it suspended and removed hunger and thirst, while leaving appetite and digestion unaffected; that it prevented excitement of the circulation under exercise; and that it probably diminished urinary solids

This growing medical interest in Coca was further reflected the following year's release of the 1877 booklet E. Coca: A Treatise on Brain Exhaustion, Helmsley, U.K as the cause of disease, by William Tibbles. This work -- with the motto "Believe one who has experience to justify his opinion" -- featured Tibbles' findings upon Coca's efficacy towards treating numerous ailments, which he observed through having used -- and prescribed -- the leaves for years. recommended the use of coca for a variety of physical and mental diseases.

The coca dosage regimens recommended by Tibbles, Searle, and their colleagues would have resulted in daily ingestion of no more than 65 to 160 mg of cocaine. Coca-Cola, promoted as a “Brain Tonic" for exhaustion, went through several changes in its formula (Louis and Yazijian, 1980) and from the 1890s to 1903 contained approximately 60 mg of cocaine per 8-ounce serving.
Interest in Coca in the United States, in the wake of Dr. Louis Elsberg and Vin Mariani's arrival in New York City around 1872, was no less enthusiastic regarding the arrival of this "new" tropical wonder-drug. The year Tibbles released his book on Coca and brain exhaustion, Dr. G. Archie Stockwell wrote, in a piece appearing in the Boston Medical and Surgical Journal that Coca extract was good [Musto, People magazine, November 24, 1986] for fighting depression, conserving energy and was not addictive, that it cheered you up and not infrequently caused "unequivocal aphrodisiac." Dr. William Searle, 1881, A New Form of Nervous Disease, together with an Essay on Erythroxylon Coca mirrored Chistison's, Tibbles' and Thudichum's findings upon Coca's sustaining abilities. With regard to this, Searle, noted:

For more than three years past the writer has used Coca himself and prescribed it extensively for others. I need not repeat to those who hear me my experience [see previous essay]. In addition to this, however, I have found for myself that, when compelled to forego sleep, if I chew the leaves the loss is not felt, or if a brief nap is caught in the morning, the waking is free from the stale, exhausted feeling which used to mark those hours, and I am elastic and buoyant as if I had slept all night. But if I chew it freely during a day of ordinary labor, the sole result is a domination of customary appetite. It is not a little curious that, while its use disperses the desire and need for sleep, it does not prevent sleep as do coffee and tea.

In his previous essays, Searle recounted his extensive use of Coca. He compared Coca favorably to other stimulants, particularly Tobacco:

The use of tobacco, both by smoking and chewing, is offensive-- the former to many, the latter to every decent man. Since, however, Coca is not smoked, and the juice extracted by chewing the leaves is swallowed, these objections do not apply. The breath of the tobacco smoker; that of the Coca-chewer to but a very few, and they sensitive persons who would be troubled by so faint an odor as that of tea.

As to the comparative usefulness of these two substances in sustaining under exertion, the balance inclines heavily in favor of Coca.

Smoking is said to promote digestion. The same, is said, by Mantagazza, to be true of drinking an infusion of Coca. Tobacco to the novice in its use is exceedingly nauseous and disagreeable. Coca is unpleasant to no one. 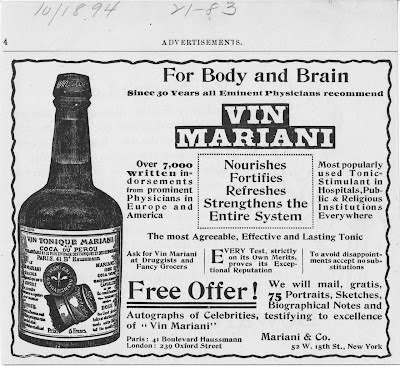 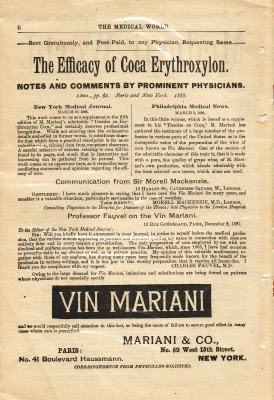