AMA Council on Pharmacy and Chemistry 1905

By 1905, the year of Tobacco’s deletion from the U.S. Pharmacopoeia, hence shielding from the USDA’s regulatory authority by the 1906 law’s definitions of substances that could be regulated, the A.M.A. founded its Council on Pharmacy and Chemistry. It consisted of 15 men (in 1906-07), including U.S.D.A. Bureau of Chemistry Chief, Harvey Washington Wiley, U.S.D.A. Drug Division Lyman.F. Kleber, A.M.A. General Secretary, and J.A.M.A. editor Gene Simmons.

It would take the task of condemning Vin Mariani with a report citing the acquisition of a sample of Vin Mariani dated March 10, 1905, and published in J.A.M.A. on November 24, 1906, at pages 1751-1753 Vin Mariani Official Report by Council on Pharmacy and Chemistry- With Comments

This preparation was assigned to a subcommittee of the Council and the following is an abstract of the report of the committee: Samples of Vin Mariani and of the literature distributed by the manufacturers were examined. It appears that the beverage or medicine known as Vin Mariani is a preparation of red wine, apparently imported from Bordeaux, and fortified, in this country, by an alcoholic preparation of coca leaves or other parts of the coca plant.

The committee considered, first, the character of the red wine as imported. A sample received from the port of New York, March 10, 1905, from Henry Clausel & Co., Bordeaux, and consigned to Mariani & Co., on analysis was found to have the following composition:

A sample of Vin Mariani, as bought in the open market in an original package, has also been analyzed and found to have the following composition: 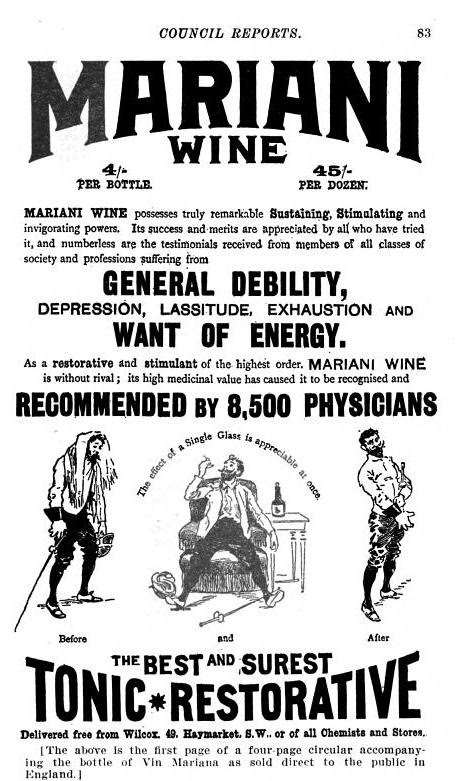 The increased alcoholic strength of Vin Mariani over the Bordeaux wine from which it is made, as shown by this analysis, doubtless comes from he alcohol extract containing the coca bases, as already stated. Approximately 6 percent of sugar is also added to the wine.

Judging from the analysis therefore, Vin Mariani corresponds to a mixture of an alcoholic preparation of coca leaves and ordinary Bordeaux red wine with the addition of about 6 per cent of sugar.

Vin Mariani conflicts with Rule 5, which requires that “no article will be admitted or retained, concerning which the manufacturer or his agents make misleading statements as to the geographical source, raw material from which made, or method of collection or preparation,” by stating in the advertising literature that :

“The United States government, under the Pure Food Law of March 3, 1903, further emphasizes all previous analysis of Vin Mariani by admitting Mariani’s wine as absolutely pure and unadulterated.”

Whatever may have been the intent of the above statement, its effect is to deceive.

The conjunction of the terms Vin Mariani and Mariani’s wine can only be construed as meaning the same thing. Inasmuch as it does not appear that Vin Mariani is imported into this country, it would not have been possible for the United States government to inspect it and as to the wine obtained from Henry Clausel & Co., from Bordeaux, it is not in any sense Mariani’s wine except that of ownership. It is of the opinion of the committee that this phrase can only result in deception and the construction of the language strongly favors the supposition that it is intentionally meant to deceive. This false claim is practically repeated in the other pamphlets published by the Vin Mariani Company, although not always in the same words.

This preparation also conflicts with Rule 6, which states that “No article will be admitted or retained of which the manufacturer or his agents make unwarranted, exaggerated or misleading statements as to therapeutic value,” in that the firm’s letter-heads have printed on them the following: “Vin Mariani purifies the blood stream, strengthens the circulation, stimulates muscular fiber and nerve tissue, is a respiratory stimulant, strengthens the heart muscles, and is an emergency food in the absence of all other nutriment. Successfully employed as an adjuvant in anemia, debility, diseases of the chest, nervous troubles, muscular or mental overstrain, neurasthenia, and allied conditions, and in certain cases of protracted convalescence.”

The committee believes that Vin Mariani is intended as a beverage rather than as a medicine.

The report concludes: ”The committee recommends, therefore, that Vin Mariani be refused recognition and that this report be published in full or part.” In accordance with this recommendation the above abstract of the report is herewith published. W. A.Puckner, Secretary

VIN MARIANI MADE IN THIS COUNTRY

According to the above report, Vin Mariani as imported is simply an ordinary cheap French wine, the preparation sold in this country as Vin Mariani being compounded in this country. Yet the advertising literature, the label on the bottle, etc., state directly or indirectly that it is a French preparation. Until recently – presumably until the vendors realized that the truth regarding this point would come out – the advertisements in medical journals contained an analysis by a chemist in Paris. The shape of the bottle, the character of the printed matter accompanying the bottle, etc., are evidently intended to convey the impression that it is imported. So as far as this point is concerned, Vin Mariani is sold under gross misrepresentation to and is a fraud.

Vin Mariani was at one time advertised to the public in this country, but, so far as we know, it is not at the present time; at least not directly. Yet it is most effectively advertised to the public indirectly, and this with little expense to the promoters, the cost of the circular around the bottle being the only expense -- doctors who prescribe it to the rest. If those who are in the habit of prescribing Vin Mariani will examine the advertising that goes into the hands of their patients, they will realize how true it is that our profession is responsible for much of the "patent medicine" taking.

Few laymen could withstand the temptation to buy the stuff for any ailment that comes along when they read in the circular that this "medicine," which their doctor evidently thinks is a good thing, is so highly recommended, for all the ills that befall us mortals, by the Pope of Rome, the Czar and Czarina of Russia, the Queen of England, the Shah of Persia, the King of Norway and Sweden, the Queen of Portugal, the Queen of Saxony, the Crown Prince of Cambodia, Ferdinand of Bulgaria, and by the whole list of ambassadors, generals, politicians, musicians, actresses, etc. The testimonials of these great meant and women are enough to convince the most skeptical that this remarkable medicine will do everything but raise the dead-- and under favorable circumstances accomplish even this. And still more--- it will win battle! Witness this from the governor-general of Madagascar: "We were refreshed by Vin Mariani, and before morning carried the stronghold." Alexander Dumas and Emile Zola are credited with calling it "the elixir of life." One very strange thing about the testimonials is in the circular used in this country is that all are written by foreigners. But Americans (President McKinley-- think of it -- among others) are honored by having their testimonials quoted in the circulars used on the other side of the Atlantic. Why? Is it possible that the testimonials are fakes?

Here are a few of the conditions that the circular says Vin Mariani is good for: “Anemia, winter cough, debility, vocal weakness, la grippe, contained fevers, bronchitis, nervous troubles, muscular weakness, diseases of the aged, malaria, melancholia, overwork, neurasthenia, impotence, malnutrition, depression, heart troubles, wasting diseases, mental overstrain, and in certain cases of protracted convalescence.” The following quotations are taken from blotters – circulated n this country – which are evidently intended for the laity, as well as for physicians:

“Vin Mariani creates and sustains vigor and energy. Guards against wasting diseases. When everything else has failed try it to prove its merits.” “Lung, Throat and Stomach Troubles benefited by Vin Mariani; this Ideal French tonic strengthens entire system of Body, Strengthening, Refreshing,.”

WHY BLAME THE LAYMEN FOR USING NOSTRUMS?

Can we blame the laymen for using peruna, wine of cardui, etc, simply because they are advertised, when there are physicians who, for the same reason, prescribe concoctions that are just as quackish and useless? And can editors of medical journals consistently find fault with newspapers for carrying advertisements of fraudulent “patent medicines” when they themselves admit to their pages advertisements of nostrums that are no less fraudulent and of no more value? One word more: There is an organization known as the Proprietary Association of America, but it is usually referred to in common parlance as the “patent medicine” men’s association. It will be remembered that last year we printed a list of the members of this body, among which was the Vin Mariani Company. It will be remembered also that in the list were the names of certain firms who were supplying medicines to physicians, but practically all resigned from membership and their resignations were published by us. We have not had the pleasure of publishing the resignation of the Vin Mariani Company. On the contrary, we note that at the last annual meeting of the “patent medicine;’ men’s association this firm was still an active member, Mr. A..L. Jacobs, who stands for the Mariani Company in this country, being one of those who registered at the meeting.

This AMA Council on Pharmacy Report dismisses Vin Mariani's, therapeutic applications, without supplying any information that Vin Mariani and/or coca was either useless or somehow dangerous, nor why 30+ years of favorable to coca medical review in medical journals mattered less then the AMA’s assumption that a substance was somehow bad because the AMA had labeled it a “nostrum”. Such an attitude implied inferiority and obsolesce for a medical pharmaceutical political alliance crafted to promote refined and synthetic “medications”.

Instead this AMA report would funnel its inquisition of Vin Mariani via a charge of "misbranding" because the bottles were embossed “Paris, France”, whereas while the product was the formulation – recipe – of Vin Mariani as initially created and manufactured in Paris, France, Vin Mariani sold in the United States and Canada was not French as far as its point of manufacturer was concerned; for while Vin Mariani sold in Europe was still made at Mariani's plant in Neuilly-Sur-Seine outside Paris's west end, the wine sold in the U.S. was made in New York City, at Mariani's factory at 52 West 15th Street, with the mixing of the identical ingredients of identical origins: Bordeaux from France, and Coca extract made at Mariani’s Neuilly-Sur-Seine, France facility from Coca leaves imported from Peru. It would make no such recommendation for a modification to any such Vin Mariani description as say, French Formulation, Compounded and Bottled In Manhattan, N.Y.

The above AMA Council of Pharmacy and Chemistry’s attacks on what it termed “patent medicines”, and on the American Proprietary Association, this was but a part of a campaign against proprietary medicines- generally herbs – as reflected by the following March 10, 1910 Journal American Medical Association editorial for combating the "evil" of the proprietary medicine business. "Proprietary medicines," consisting generally of blends of organic substances such as Coca leaves that it was felt that the general adult public had no right to purchase.

This Council of Pharmacy and Chemistry was but part of an organized campaign through the AMA/APhA and the USDA and the William Randolph Hearst media empire to convince the public to support surrendering their market choice for the sake of a political alliance including that of other substances undeniably “habit-forming” but never acknowledged by Wiley and Company as such, e.g. refined white power sugar and Tobacco.

It wrapped itself in the mantle of protecting the public health, but would betray this to defend favored political-economic interests, as marked by the glaring inconsistencies in logic, such as that between cocaine and caffeine and nicotine, along with the relative health effects of coca versus these other commodities- particularly Tobacco.

By no means would it include any scientific standard for determining what constituted a ‘habit-forming’ or deleterious or dangerous.

Posted by Douglas Andrew Willinger at 5:04 AM