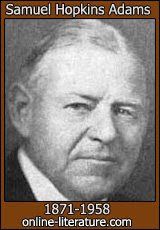 Samuel Hopkins Adams – in close collaboration with the U.S.D.A.’s Harvey Wiley – reflects, wrote numerous articles designed to increase support for this drug regimen, published in newspapers and magazines, such as the William Randolph Hearst publishing empire, such as Good Housekeeping which made Wiley a regular after his resignation from the U.S.D.A. in 1912. In the June 8, 1907 Colliers Magazine (a non-Hearst publication) published an Adams authored article in his "The Great American Fraud” series: “Patent Medicines Under the Pure Food Law," where he gleefully --and ominously -- boasts about the effects of prohibitionist State laws upon the rapidly shrinking licit market in Vin Mariani:

In the sudden light which the Pure Food law throws into certain dark corners, that widely-bruited pick-me-up for lassitudinous ladies, Vin Mariani, takes on a changed aspect. From the enthusiastic encomiums, given out for advertising purposes by sundry actresses, one might suppose that the so-called French preparation was at once the most bracing and the most harmless of concoctions. Across the label, however, the Pure Food law has recorded the warning fact:

"Each once represents one-tenth of one grain of cocaine." [6 mili-grams].

This shuts it out of New York, Chicago, Philadelphia, all cities and towns in Massachusetts, and many other places. As the average American women can read and is not a fool, I fancy that, even in those localities where cocaine can be sold only in patent medicine form without a prescription (as has been the case until recently in the District of Columbia, thanks to Senator and ex-Doctor Gallinger's efforts on behalf of the nostrum people), the Vin Mariani trade will rapidly decline.

Posted by Douglas Andrew Willinger at 5:08 AM