In the insurance area, Marialuisa assists policyholders in settling and mediating coverage disputes and designing insurance portfolios. She works with Bermuda, London Market, U.S. and captive insurers and with a range of traditional and new insurance products. She has extensive experience in asbestos, silica, pharmaceutical and medical device and other coverage claims as well as in insurer insolvencies. Her recent presentations include "Settlement Credits and Excess Insurers" (Mealey's Allocation and Settlement Credits Conference, Nov. 2005) and "Solvent Schemes: Running Off or Running Out?" (Mealey's Advanced Insurance Coverage Conference, Jan. 2006).

Marialuisa is listed in the Guide to the World's Leading Insurance and Reinsurance Lawyers (Euromoney 2004) and The International Who's Who of Insurance & Reinsurance Lawyers. She has co-chaired several Mealey's insurance conferences. In the food and drug area, Marialuisa advises corporations and trade associations on FDA regulation of products including OTC drugs, food, dietary supplements, and medical devices. Her work has involved federal regulation of agricultural biotechnology and plant-based pharmaceuticals.

Her article, "Inactive Ingredients in Over-The-Counter Drug Products", appeared in Regulatory Affairs FOCUS in August 2002. Marialuisa serves as a civil case and child protection mediator in the Superior Court of the District of Columbia. The National Head Start Association named her a 25th Anniversary Star Honoree for her long service to that organization.

The 2004 version, ended with the following line that would be dropped from later versions: “She likes travel, bicycling, photography and cooking”.

Lexis-Nexis lists her practices in these areas of law: Food and Drug Law; Insurance Coverage; Mediation, though without indicating when she entered each. 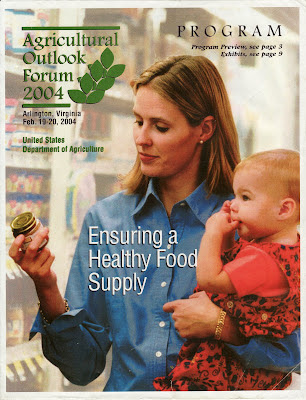 This 2005 Covington & Burling Marialuisa Gallozzi biography fails to mention her recent paper with regards to agricultural biotechnology and plant-based pharmaceuticals regulation about GMO plants for growing patentable drugs that she is listed as presenting at the U.S.D.A. February 2004 Annual Conference “Ensuring a Healthy Food Supply". She was listed as one of three presenters in a panel “Promise and Pitfalls of Plant-Made Pharmaceuticals And Industrial Compounds,” moderated by Neil E. Hoffman, Director, Regulatory Programs, Biotechnology Regulatory Services, Animal and Plant Health Inspection Service, USDA. Her paper was titled “The (U.S.) Food Industry’s View About the Development of Plant-made Pharmaceuticals and Industrials.” [2] It was only available on the internet briefly in 2004, and of the more then 75 speaker presentations at that 2004 USDA conference, is the only one where both paper and its author are deleted from the later html version of the conference schedule, without replacements.

The Covington and Burling website (Health page, early 2005) acknowledged that the law firm has worked closely with the Drug Policy Foundation and other organizations involved with drug policy reform:


Commonwealth v. Hutchins. We represent Mr. Hutchins and the interests of similarly situated patients for whom the medical use of marijuana is necessary, in a variety of state and national initiatives aimed at decriminalizing such use. We work closely with the Drug Policy Foundation, the Marijuana Policy Project and sympathetic members of Congress and selected state legislatures. American Civil Liberties Union - Drug Policy Litigation Project. We were asked to assist the ACLU in preparing a letter to the Drug Enforcement Agency in support of an application by a professor at the University of Massachusetts for registration to manufacture or distribute controlled substances for the purposes of a scientific study on medical marijuana. Specifically, they requested that we opine on the consistency of the application with the United States' treaty requirements pursuant to the 1961 Single Convention on Narcotic Drugs. We have continued to provide advice on related aspects of this matter.

[1] Lexis-Nexis search: http://www.lawyers.com/find_a_lawyer/search/atty_profile.php?attyindex=0&firmlid=355425&attylid=355474&attylids=355474&lids=&country=&firmname=&firstname=Marialuisa&lastname=Gallozzi&searchtype=N&termtype=2&personalaop=&personalterm=&businessaop=&businessterm=&language=&pagenum=1&city=&county=&state=&country=&resultcount=&displaycount=&sorttype=&sed=&ts=0 [2]“U.S. Food Industry’s View on the Development of plant-made Pharmaceuticals and Industrials” by Marialuisa Gallozzi is listed in PDF http://www.usda.gov/oce/forum/Archives/2004/Program/2-10final.pdf and other fixed format versions of that conference’s published schedule, with its author’s name appearing with two other panelists, Barry Holtz, CEO, Inflexion Therapeutics, who gave a presentation “Moving Products into the Clinic: The Next Stage of Development for the Plant-made Pharmaceuticals Sector” and Rachel G. Lattimore, Attorney, Arent Fox Kintner Plotkin & Kahn, PLLC, who gave the presentation “Plant-Made Pharmaceuticals Confinement Systems”.

http://www.usda.gov/oce/forum/Archives/2004/speeches/speeches.htm#promisepitfall
delete both this paper regarding the topic GMO plants for growing patentable drugs, otherwise known as "Plant Based Pharmaceuticals" or "Plant Made Pharmaceuticals"and its author’s name on the list of panelists- apparently purged, according to a USDA research librarian who could find no way to access this paper. (Other such papers that are not available are nonetheless otherwise still listed along with their authors’ appearance upon their respective panels).

From “The (U.S.) Food Industry’s View About the Development of Plant-made Pharmaceuticals and Industrials” by Marialuisa Gallozzi, viewable here

Mention of this paper was subsequently added in her Covington & Burling biography which appears in the following 2008 version:


Marialuisa ("ML") Gallozzi is a partner in the insurance coverage and food and drug practices.
Her insurance advisory practice focuses on: negotiating settlements of insurance coverage disputes; advising policyholders on the insurance aspects of transactions; negotiating and analyzing terms of policies, including clinical trials, patent and other specialty coverages; and representing policyholders in claims against insolvent and runoff insurers in the United States and abroad, and state guaranty funds. She also provides food and drug advice to manufacturers of medical devices, over-the-counter drugs, and dietary supplements.

Ms. Gallozzi is a managing partner for Legal Personnel at the firm, with responsibility for associate issues. She served as an Associate Ombudsperson and co-chaired the summer associate program from 2004 to 2006.